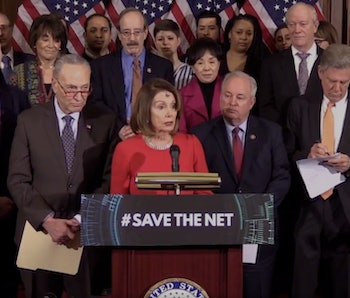 Action on a new bill to restore net neutrality protections for the internet will happen in a “matter of weeks,” announced members of Congress on Wednesday.

Mike Doyle, chair of the House Energy and Commerce Committee’s subcommittee on communications and technology, will hold hearings on the two-page bill next week. From there, it will go to full committee, and after that it, will come to the House floor for debate.

"In a matter of weeks, we will act upon this"

“In a matter of weeks, we will act upon this,” said Speaker of the House Nancy Pelosi in a press conference in D.C. Wednesday.

“This is a two-page bill,” said Anna Eshoo, a Representative from Palo Alto, California. “It has all the clarity in the world. There should be not be any excuses on the part of any member of Congress.”

The Congressional Democrats who spoke on Wednesday made it clear that net neutrality has popular support, and that a restoration of the net neutrality rules comes down to a fight between the average member of the public and someone with a vested interest in the success of an internet service provider.

“We say to the millions of Americans who care about this, ‘continue to let your representatives and your senators know how you feel,’” said New York Senator Chuck Schumer. “With your power behind us, we can succeed.”

The bill would bring back net neutrality protections removed by the FCC in December 2017. Among the protections removed: Title II status for the internet, which made it the same as telephone service and thereby more closely in the jurisdiction of the FCC. What also might be restored is a “general conduct standard,” which essentially future-proofed net neutrality protections from internet applications that haven’t been anticipated.

“The reason all of us have been in this is because of our belief that the big cable companies should not be able to pick and choose which videos you should get to watch and which articles you can read by favoring one outlet over another,” said Oregon Senator Ron Wyden.

The Democrats’ bill isn’t the only net neutrality bill in the House. Trade magazine Broadcasting & Cable has reported on three Republican-sponsored bills — none of which, crucially, include a return to Title II classification. With respect to tough net neutrality protections, they’re effectively toothless.

Major websites, like members of the Internet Association, support net neutrality, saying starting a new business online without equal internet would be extremely difficult. And the general public supports it, evidenced by the flooding of the FCC website in May 2017 with comments demanding it uphold net neutrality. (The FCC allowed a falsehood to persist that its site was attacked by bots created by pro-net neutrality hackers, and that 22 million comments weren’t legitimate. It turned out the FCC site wasn’t hacked and the comments were largely legit. However, the FCC said it could ignore the comments.)

A nationwide poll conducted by the pro-net neutrality Mozilla group (makers of the Firefox browser) found that support for net neutrality was at 78 percent, and it was at 84 percent for adults younger than 35.

This is a developing story.