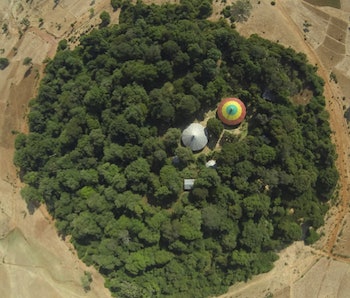 In Northern Ethiopia, the natural environment and the spiritual environment are entwined. There are just 1,022 forests that remain in the region known as South Gondar, each of which surrounds an Ethiopian Orthodox Church. These scattered bursts of green are a refuge for both the religious and for shrinking biodiversity. But while some of these forests hold churches older than 1,500 years old, modernity is threatening their existence, as a study published Wednesday in Plos One warns.

The study’s principal investigator and Colgate University associate professor Catherine Cardelús, Ph.D., tells Inverse that a dilemma lies at the heart of the situation: The forests are threatened by human use, but humans have also protected them for hundreds of years.

“These forests are active with people and are critical to the community,” Cardelús says. “These forests are seen as the cathedral of the church, and where shade is found, community members gather for meetings, spiritual guidance is given, small coffee or beer plantations are established, and often cows and goats graze.” Her new study audits the church forests, evaluating their organisms and threats, in hopes of creating an effective course of action.

Each forest contains a head priest, monks, nuns, and, often, a school frequented by the children from a nearby community. The forest is seen as an entity that protects the sacredness of the church, and, consequently, the forest’s association with the church protects it. Community members say the forest shelters the sacred tabot — a replica of the Ark of the Covenant that’s kept within the church building — much like the biblical belief that the Ark shelters God’s commandments. Protecting the forest is seen as protecting the divine — an environmental act known in the academic world as “shadow conservation.”

The native forests beyond the church forests have disappeared over the past century: Today, only 5 percent of Ethiopia is covered in forest; in the early 20th century it was closer to 45 percent. Deforestation became rampant when the land was nationalized in 1974 and much of the forests became converted to farmland. Agricultural expansion is incredibly important in Ethiopia because the country’s massive population of 100 million makes it the most populous landlocked country in the world.

To evaluate the current state of the church forests — which are thought to have declined in tree density over the past 80 years — Cardelús and a team of American and Ethiopian researchers examined 44 of them in South Gondar for species diversity, biomass, and human disturbances. Each forest is, on average, the size of five football fields, which to Cardelús is worryingly small.

“When forests are small, the area of the edge is high compared to the interior of the forest, and the negative effects of the edge can be devastating for the organisms that live in the forest,” she explains. “Along the edges, forests experience higher temperatures, greater wind, lower humidity, and an overall harsher and less buffered environment.”

The team found evidence of human disturbance across all of the forests they studied. Until recently, remnant trees and shrubs around the forests acted as buffers, but these have been cut down to make room for food.

Within these forests, a problem is rooted: The church forests need more land to grow, but the people of the church need that land too. As the area around the forest becomes converted to economically beneficial agricultural and pasture land, the pressures on the forests have increased. For example, non-native eucalyptus plantations are consuming more water than the native trees — and while they are an economically important crop, they threaten the biodiversity and longevity of Ethiopian greens.

“The activities of the community can be intensive and impact the forests,” Cardelús notes. “For example, gathering areas are maintained tree-free, which limits forest regeneration and usable forest area. The grazing of animals, while technically not allowed, often happens and leads to the loss of seedlings. These forests are also overrun with weedy species.”

Ethiopia’s church forests need an active conservation process that balances human needs with forest conservation, write the researchers. The communities have already done so for hundreds of years, constructing walls to keep out grazing animals and protecting them from deforestation. But the evidence suggests that now, more needs to be done.

Some conservation efforts that can be made now, says Cardelús, include establishing nurseries of native trees that can be transplanted into and around these forests, protecting the old, large trees that are the seed sources, and educating the community on the important role trees play in soil conservation, water, and biodiversity.

“I am hoping that this paper highlights the importance of these sacred forests in people’s lives, and the need to tread lightly within them,” she explains. “They are critical to the community and its culture, and maintaining these forests would benefit not only the biodiversity that they hold, but also the culture and community dependent on them.”

Land-use can change can have profound effects on forest communities, compromising seedling recruitment and growth, and long-term persistence of forests on the landscape. Continued forest conversion to agriculture causes forest fragmentation which decreases forest size, increases edge effects and forest isolation, all of which negatively impact forest health. These fragmentation effects are magnified by human use of forests, which can compromise the continued persistence of species in these forests and the ability of the forests to support the communities that depend on them. We examined the extent and influence of human disturbance (e.g. weedy taxa, native and exotic tree plantations, clearings, buildings) on the ecological status of sacred church forests in the northern highlands of South Gondar, Ethiopia and hypothesized that all disturbance would have a negative effect. We found that disturbance was high across all forests (56%) and was negatively associated with tree species richness, density, and biomass and seedling richness and density. Contrary to expectation, we found that forests < 15.5 ha show no difference in disturbance level with distance from the population center. Based on our findings, we recommend that local conservation strategies not only protect large forest, but also the small and highly used forests in South Gondar which are critical to the needs of local people including preserving large trees for seed sources, removing exotic and weedy species from forests, and reducing clearings and trails within forests.