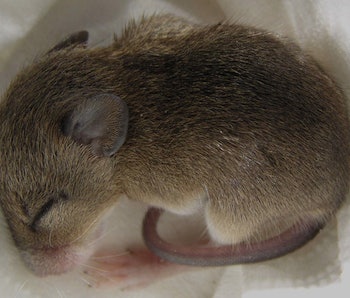 Sleep still blows everyone’s minds — specifically, in magnetesque fashion— How does it work? We’re coming closer, maybe. We know fruit fly brains are clusters of clock cells, and among them lie a few master cells to rule them all. These circadian pacemakers operate via ion channels that ebb and flow, oscillating sodium and potassium ions across cellular membranes akin to the pumping pedals of a bicycle. In a new study reported Friday in the journal Cell, Northwestern University researchers say they’ve demonstrated that this molecular bicycle mechanism is remarkably similar in fruit fly brains (which we’ve known for 15 years) and mouse brains (which the researchers say is the new part of the discovery), and therefore, plausibly, exists in our human noggins.

That the similar ionic oscillations are found in both mice and flies, says study author and Northwestern University neurobiologist Ravi Allada, means that the sleep master control system is most likely quite old. “This oscillation mechanism appears to be conserved across several hundred million years of evolution,” he said in a statement.

To figure out how the mammalian clock oscillations work, the researchers explanted mouse brains and measured the frequency of neuronal firing and the membrane potentials. In the Cell paper, they report:

During the morning/day, sodium leak mediated by NA [the fly system]/NALCN [the mouse system] is elevated while resting K [potassium] currents are reduced, depolarizing the neuron to promote elevated firing rates. During the evening/night, sodium leak is low and resting K currents are elevated, hyperpolarizing the cell to suppress firing rates. The clock controlled transcript Nlf-1 drives the rhythm of NA/NALCN current, linking the core clock to ion channel activity.

What’s particularly fascinating is that the pedals of the mouse and fly bike are in sync, but mice are nocturnal whereas fruit flies are diurnal. The next step, the researchers say, is to figure out what regulates the sleep-wake controllers — the idea being that learning how to ride this bike could take us on the road to defeating jet lag and other sleep problems.

More like this
Science
Jan. 22, 2023
Humans didn’t evolve to live in cold — our survival is a lesson in ingenuity
By The Conversation, Kyoko Yamaguchi and Laura Buck
Gaming
Jan. 25, 2023
"Mindboggling" Launcher layoffs prompt outcry and tributes to WaPo gaming vertical
By Jess Reyes
Science
11 hours ago
ChatGPT could help students cheat — but it could also revolutionize education
By The Conversation and Sam Illingworth
LEARN SOMETHING NEW EVERY DAY.
Related Tags
Share: