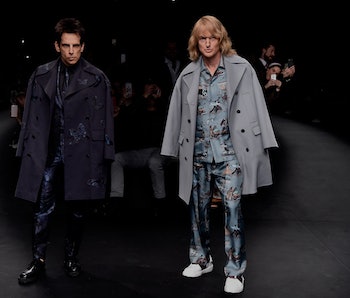 Is there more to life than being really, really, ridiculously good looking? Uh, Earth to Reader: Obviously not. The new Zoolander 2/2oolander/Zoolander II trailer released last week confirmed that Derek’s cosmic stupidity is returning to the big screen sometime in 2016. While there’s no question we’re all pumped to see more epic walk-offs against Hansel, nobody ever seems to ask what the models think. We did the heavy lifting for you.

“It hits way too close to home sometimes,” model Max von Isser admitted. His steely eyes and cut-glass cheekbones featured prominently in Ryan McGinley’s Adidas x Pharrell campaign last year, and he’s become a runway regular during New York Men’s Fashion Week. For Max, watching one particular scene, where Derek clangs together cymbals as a photographer commands, “You’re a monkey, Derek, you’re a monkey,” can get too real. “There have been many times when I’ve been like, ‘Today, I’m the monkey,’” he said. “When I’m doing it, I think: This is pretty weird. I don’t know if my mom would be proud of me at this moment.”

Torbjorn “Bjorn” Merinder, whose marimba-grade six-pack and chiseled jaw appear in glossy mens’ magazines the world over, can’t help but agree. Over e-mail, he told me that the culture of hype — “Hansel’s so hot right now” — is completely true: In fashion land, it’s less about working hard and about having the “new face.” Plus, he adds, designers, stylists, and casting directors actually can be “Mugatu-scale crazy.”

But the cosmic stupidity isn’t real, they insist. At least not entirely. Michael Elmquist, a model and photographer whose bad-boy-with-the-heart-of-a-puppy good looks have landed him campaigns for Levi’s and Patrik Ervell, is slightly irritated that models are now seen as “idiots who love themselves.” He told me in an email: “I’m not saying that’s always wrong, but a person who models is just a human. Every individual human — model or not — has the capacity to be somewhere between a dickhead and a kind person.”

Zoolander, it seems, shows a side of the industry that’s very real — but it’s not the only side. “As for models being dim-witted, there are some, as in all professions,” says Bjorn, who’s actually finishing up medical school in his native Copenhagen. Max, who started modeling after getting his degree at the University of Arizona, concurs: “I would say, like, 10 percent of them are total assholes, but I feel like that’s the same anywhere you work.” He points out that male models tend to start their careers in their twenties, after they’ve already had work experience or gone to college. It comes in handy, he says, when modeling careers inevitably fade.

Even if the stereotypes ring true, being pigeonholed still sucks. While Michael would rather discuss the different countries and cultures he’s experienced through modeling, he finds himself stuck in conversations about diets and “Blue Steel.” Max, too, thinks that Zoolander led the public to believe models are one-dimensional and, it seems, sub-human. “People will be like, oh, you’re a model, do your runway walk,” he said. “It’s like, dude, what are you, an accountant? Do you want to do some accounting right now?”

As the mens fashion editor at Models.com, Jonathan Shia has met his fair share of guys that are professionally handsome, and he can confirm that the Zoolander trope isn’t completely true. “I don’t think that stupidity is any more prevalent among male models than it is in the general population,” he said.

The models won’t boycott the sequel. “Seeing a film that takes the piss out of the industry is great, especially when so much of it is surprisingly accurate,” said Bjorn, who has watched Zoolander multiple times. “After all, showing off clothes for a living is a pretty silly profession.” Michael begrudgingly accepts that the sequel will cement the public’s opinion of the industry, but he realizes the futility in fighting it. Besides, he said, “I don’t think a literal documentary of what it’s actually like to model would inspire any sympathy.”

“If you tried to get mad about it, you’d just be this weirdo douche,” Max said. But the original has stayed with him like the hangover from a gasoline fight. “I fucking love that movie,” he said, admitting to me that Hansel inspired him to ride around the city on a scooter. With a kick of his heel, it’s beneath his feet, taking him back to the land of the really, really, ridiculously good looking.

More like this
Entertainment
8.3.2022 10:00 AM
Lightyear’s post-credits scene secretly sets up a nostalgic Pixar sequel
By Dais Johnston
Entertainment
8.4.2022 2:42 PM
Joker 2 release date, cast, plot, and more for the Todd Phillips DC sequel
By Gabrielle Bondi and Dais Johnston
Culture
8.6.2022 11:30 AM
20 years ago, Robert Rodriguez made the strangest sci-fi sequel of the early 2000s
By Jon Negroni
Related Tags
Share: