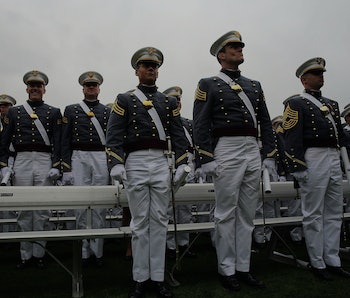 There are plenty of issues with radio host Dennis Prager’s educational venture, but let’s give credit where credit is due: Prager University just dropped some knowledge bombs. In a new video for the school, a West Point professor lays waste to the persistent claims that the Civil War wasn’t actually about slavery. U.S. Army Colonel Ty Seidule, who runs West Point’s history department, is fighting for the future of the past.

The five-minute clip burns down every argument you’ve heard from a Twitter egg, from bogus state’s rights issues to economic differences between North and South leading to inevitable separation. He also notes that regardless of what percentage of whites owned slaves, maintaining a social order in which they weren’t at the very bottom was enough reason for many poor caucasians to fight to preserve the peculiar institution. Slavery “by a wide margin” was the South’s main reason for fighting the war, he concludes.

“Slavery is the great shame of America’s history,” he says. “No one denies that. But it’s to America’s everlasting credit that it fought the most devastating war in its history in order to abolish slavery. As a soldier, I am proud that the United States Army, my army, defeated the Confederates.”

More like this
Entertainment
17 hours ago
The stars of 'Men' unpack its mysterious ancient symbolism
By Jenni Miller
Entertainment
5.16.2022 12:00 PM
29 years ago, Marvel unleashed Spider-Man’s scariest enemy ever
By Richard Newby
Science
5.15.2022 7:00 PM
200 years ago, this terror of the Amazon inspired the world’s first batteries
By Timothy J. Jorgensen and The Conversation
Related Tags
Share: