The best movie with the title Fantastic Four was made in a crazy-eyed frenzy of low-budget opportunism 20 years ago, then locked away in a vault. This is not just my opinion but critical consensus. On Rotten Tomatoes, 1994’s notorious production of Fantastic Four has a 33 percent rating. That’s compared to 27 percent for Jessica Alba’s 2005 version and a rancid 9 percent for this weekend’s bomb, already inspiring dissection.

For a long time, the 1994 version from legendary schlock producer Roger Corman was one of those lost treasures bad movie buffs would talk about, like Indiana Jones recounting the story of the lost Arc of the Covenant. Then as the 90s gave way to the full bloom of the Internet age, reports started to creep out online and some of them weren’t that bad. Red Letter Media’s Jay Bauman even managed to shoehorn a mention of the movie’s low-budget charms in a review of this latest disaster. And he was right to do so. With people arguing that the Fantastic Four are just too corny to be put on screen, Corman’s film is an important reference. It is incredibly true to the source material and incredibly corny. It is what it is.

The irony is that the 1994 film was never meant to be seen. Back in the days before spandex became Hollywood’s favorite renewable resource, studios could snap up the rights to a comic book for less than the cost of one day’s Craft services. Which is how German filmmakers Neue Constantin ended up owning the film rights to the Human Torch. The only problem was, after years of sitting on them, they needed to make a movie.

So in order to retain the rights for another decade, Neue Constantin went to Corman, already well known for his ability to get a cult classic in the can in under a week. (See Little Shop of Horrors or A Bucket of Blood). It was a strategic rather than an artistic decision. Unlike Josh Trank, they weren’t really trying to make a good movie. 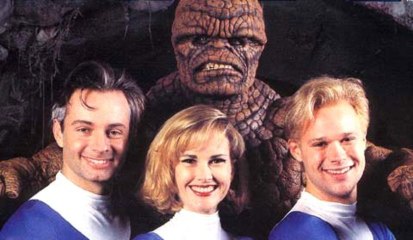 Still, they (kind of) succeeded by accident. Corman slapped together a budget of a little more than a million, then turned the project over to young director Oley Sassone, who was a glass half full kind of guy, as young directors often have to be to survive long enough to get their big break. Corman was cheap and fast, but he had helped launch the careers of Jack Nicholson, Ron Howard, and James Cameron. After a few months of frantic casting, writing, and shooting, they had a movie. Which Neue Constantin immediately locked up like a rabid dog. The whole situation from conception to final cut was so bizarre it even inspired a documentary, this year’s Doomed!

The silver lining of the cloud that was last weekend’s box office is the renewed interest in Sassone’s work. And now thanks to bootleggers, you can finally see his movie for yourself. The Thing looks like a Ninja Turtle with skin problems. Enjoy!

And Sassone is glad his work is finally being released by internet swashbucklers.

“We’re supposed to be filmmakers,” he told Vice. “That’s really despicable. Just destroy it? And nobody gets to see it?”

More like this
Innovation
6.27.2022 9:28 PM
The 6 best MacBook Pro stands
By Vanessa Spilios
Culture
2 hours ago
8 Norse gods you need to know before Thor: Love and Thunder
By Robin Bea
Culture
1 hour ago
64 years ago, Hollywood made the most rip-roaring Viking movie ever
By Emil Stern
Related Tags
Share: