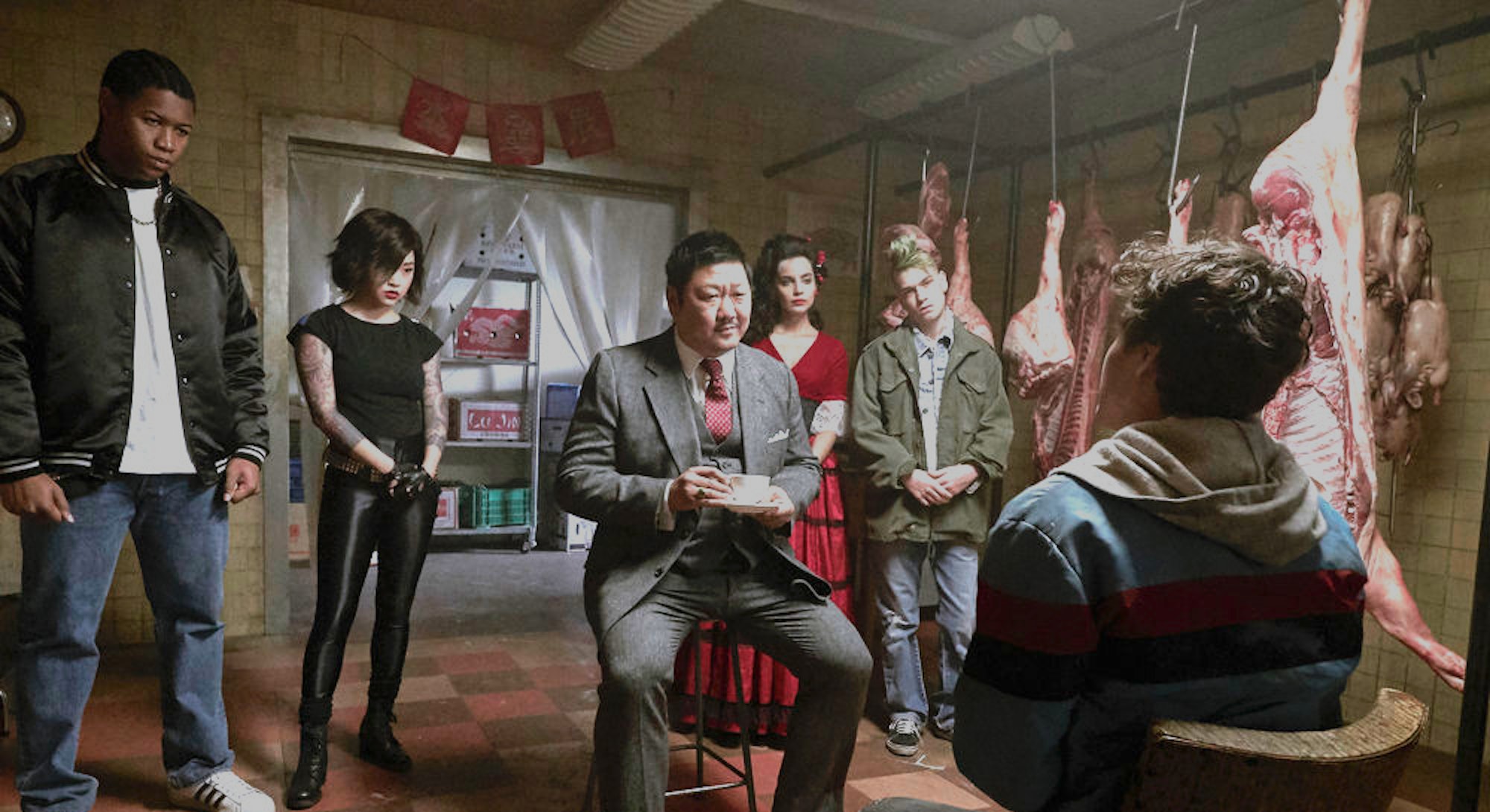 The look and feel of Deadly Class, executive produced by Avengers: Infinity War and Endgame directors Anthony and Joe Russo, is largely defined by the ways each student at the show’s prep school for assassins expresses themselves through violence. At King’s Dominion, combat is just another means of self-expression, a way for uniform-clad students to define themselves as individuals — like art class but with more blood.

These universal questions become even more complicated when your high school is a private academy for assassins from around the world.

Just as every student comes with their own legacy and reputation at King’s Dominion, they also gravitate towards unique fighting styles, weapons, and methods of killing that suit their skill sets and backgrounds.

So who’s who in the world of Deadly Class?

“Everyone has such a different fighting style,” says Siobhan Williams, who plays Brandy Lynn on the show. “It’s like your strength might be another person’s weakness.”

We visited the set in early November and got a hands-on look at everyone’s preferred method of murder.

The protagonist of the story, Marcus (Benjamin Wadsworth) comes to King’s Dominion with no real experience in hand-to-hand combat. To make matters worse, everyone thinks he’s responsible for murdering dozens of people in a fire that destroyed the orphanage where he grew up.

The character’s ignorance towards violence bleeds into the combat style he gradually develops. Whereas his classmates might attack with grace using specific weapon specialties or disciplined brute force, Marcus is haphazard, formless, and avoids direct conflict at all cost.

“He’s not like Maria or Saya where he can do a bunch of flips or kicks, whipping swords or fans,” Wadsworth says. “The only person I would ever picture is Jackie Chan because he’s somehow able to get out of these crazy situations where he’s almost getting killed, and only surviving because he picks up a chair or a cup or an ashtray and does something with it.”

Much like the iconic action movie star’s many characters, Marcus uses his environment to his advantage and focuses on misdirection.

Wadsworth cited the Rush Hour movies as personal favorites he looked to for inspiration.

A lot of this comes as a byproduct of Marcus inexperience, but also luck.

“For the most part, he’s too busy getting his ass kicked,” Wadsworth says. “But he’s used to that physical pain.”

And Marcus sure does experience a lot of pain throughout the course of the show. He’s a bit of a boy scout whose greatest talent, at least initially, is his capacity to take a beating.

“What I really liked about Marcus was how open he is and truthful, almost to a fault sometimes,” Wadsworth says. “It gets him in trouble, but I like his Captain America personality where he’ll get hit and keep standing back up because he’s fine to get hit over and over again as long as he thinks he’s doing something right.”

At King’s Dominion, Maria (María Gabriela de Faría) is a member of the Soto Vatos gang, defined largely by her connection to fellow classmate Chico and his father, the drug kingpin known as El Alma del Diablo. Maria’s entire family was murdered by the cartel when she was still a little girl, and she was only spared when Chico begged for her life.

In combat, Maria uses what looks a lot like a Japanese war fan done in a style that reflects her Mexican heritage. When we first meet her in the show, she’s dressed in Día de los Muertos costume and makeup. Posing as a performer, she uses her fans against policemen pursuing Marcus through the crowd.

“She’s Mexican and she loves to dance,” actress María Gabriela de Faría says of her character. “I think the reason why she has this very specific way of attacking and killing people with a dance is because it’s also meant to be very distracting for the opponent.”

Maria is a femme fatale, to say the least, and almost immediately after Marcus lands at King’s Dominion, he gets caught in a love triangle between her and a fellow classmate named Saya — which inevitably attracts the anger of Chico.

At King’s Dominion, Marcus almost immediately butts heads with Chico (Michel Duval), the son of renowned Mexican drug cartel kingpin El Alma del Diablo. As the leader of Soto Vatos, Chico is perhaps the single most powerful student in the school in every sense of the word. He’s tall, threatening, has legit killing experience, and always has a small posse backing him up.

“He’s the king of the school,” Duval says. “His reputation is everywhere. What I really love about the character is that he’s a fighter, a killer, and strong, but the information that he possesses is his true power.”

When asked about Chico’s fighting style, Duval compared it to that of a serpent.

“He’s not the type to have the guard up moving side-to-side waiting to respond,” Duval says. “He’s just chilling, like a snake. He just goes around, minding his own business, but when he strikes, it’s a fatal shot.”

To “bring that snake into a human shape,” he practice bugging his eyes out, unhinging the jaw, and adjusting his posture so he’d look like a snake about to strike.

“I really dig into that animal state and looked at videos you know of snakes, especially how they would bite, like a cobra, python, or a rattlesnake, their different aspects,” Duval says.

And what’s a snake without its fangs? As we see in the first episode, Chico carries a hunting knife with a gutting hook, and he isn’t shy about using it to threaten his fellow students.

Unlike some of his classmates that either have minimal experience or reservations about killing, Chico has been doing it for most of his life. That’s a major reason Chico starts out the series as its principal villain.

“Sometimes you’re going to see him as this human person, but then he reminds you of what he’s capable of, that his real instinct is killing because he started when he was around six years old,” Duval says. “For a kid, that’s traumatic.”

The first real assassin-in-training Marcus connects with during Deadly Class is Saya Kuroki (Lana Condor), the leader of the Kuroki Syndicate clique at King’s Dominion. The broader Kuroki Syndicate in Japan, led by her father, is one of the most influential groups in the Yakuza mafia network. Saya wields a katana sword, a family heirloom, in combat.

In the pilot episode, Saya rescues Marcus from the police using intense acrobatics and some extreme motorcycle skills. After he rejects Master Lin’s initial invitation to join King’s Dominion, she also convinces him (supposedly on an assignment) to rejoin with a kiss.

Of all the students at the school, Saya comes off as the most intimidating. Is it the sleeve of badass tattoos? Or the ease with which she’s able to use her katana?

Speaking with Elle magazine in October, Condor said, “Saya is a vicious fighter and lone wolf. She rarely ever lets anyone in … and then all of a sudden, she finds herself in a love triangle.”

Marcus’ first real friend at King’s Dominion is a quirky kid named Billy Black (Liam James) who comes across as goofy and a bit unhinged. After pranking a fellow student in an early scene, Billy gets his arm broken, but it barely phases him because almost everything is a joke.

As is the case with many jokers, a portion of Billy’s humor comes from his personal trauma. He abandoned at the school by his father.

“He tries to transcend that trauma, I think,” James says. “He tries to just be in that space where you are just using humor because you want to genuinely connect with people.”

Rarely seen without his skateboard and always sporting a messy green mohawk, Billy isn’t affiliated with any specific crime families or syndicates. He’s labeled a Rat, just like Marcus, so he pulls the newcomer under his wing.

Billy also fights in style similar to Marcus, using aspects of the environment to his advantage rather than confronting a threat head-on. He can use his skateboard to make a quick getaway or shield himself, but he can just as easily uses it to bash somebody over the head.

In a school for assassins where most of the students come from crime families, reputation is everything. Willie Lewis (Luke Tennie) exemplifies that fact and the problems that come with it. Specifically, despite his background, Willie is a pacifist.

“Willie’s reputation provides him with security,” Tennie says. “He is someone who does not want to compromise on his morals, whether those moles stem from trauma or his heart or conviction, they’re still there. Willie does not like violence.”

“If he has the most badass reputation at the institution, no one will want to engage in any sort of combat,” Tennie says. “So he just maintains the front.”

Despite Master Lin generally disproving of guns — after all, deadly assassins should be more skilled and subtle — Willie’s go to is a handgun.

We see those skills in the pilot episode, but Willie’s background also influences his hand-to-hand combat.

“He grew up on the streets of Watts, California,” the actor says. “So it’s streetfighting, mixed in with Master Lin’s Eastern martial arts. I’d also say boxing or kickboxing. He’s a big dude but he’s light on his feet, not nothing like MMA.”

According to Deadly Class co-showrunner Miles Orion Feldsott, Brandy Lynn (Siobhan Williams) is among the “most deadly” students at King’s Dominion. She’s the leader of Dixie Mob, a group of white supremacists and neo-Nazis within the school.

The first several issues of the Deadly Class comics don’t feature much of Brandy, but in the show, she’s given a far more significant role. As power dynamics shift at King’s Dominion throughout the season, Brandy proves herself to be something far more threatening than her ditsy hick demeanor suggests.

“I think the reason she’s so deadly is that she has this element of unpredictability,” Williams says. “She plays very into the dumb Southern belle ditsy stereotype. But that’s completely intentional. She uses that to her advantage. It’s a bait and switch.”

Part of blending in involves assuming the stereotypical role as the school’s blonde lead cheerleader — except her pompoms have a deadly twist. Williams described Brandy’s go-to weapon as “cheerleader pompoms with these claws, like four-inch razors that stick out.”

Inverse was invited to attend a set visit event for Deadly Class in November 2018. Expenses for the trip were paid for by Syfy.