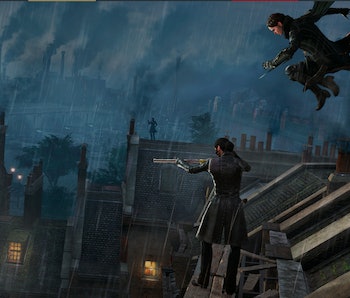 Ubisoft just dropped two little gems from Gamescom in Germany. Besides a brand new trailer, the game developer debuted a sufficiently epic 10-minute walkthrough of its new game Assassin’s Creed Syndicate, which you can watch below.

In the game, you play as Jacob and Evie Frye, two cloaked assassins trying to take over the criminal underworld of 19th-century London during the Industrial Revolution. The walkthrough shows Evie as she tries to stealthily infiltrate the iconic Tower of London to assassinate a character named Lucy Thorne, a member of the shadowy Knights Templar, the big baddies who pull the strings behind the scenes.

This installment of the popular series looks to add to the historically-based context of the previous entries and will make for a good primer before the Michael Fassbender-led film adaptation bows in December of next year.

More like this
Entertainment
21 hours ago
Halo Season 2 could fix the show’s most annoying problem
By Mark Hill
Innovation
20 hours ago
China and Russia are on track to set up a Moon base by 2036 — here’s the plan
By Allie Hutchison
Entertainment
20 hours ago
Why Moon Knight’s head writer refused to “go toe to toe” with Batman
By Eric Francisco
Share: