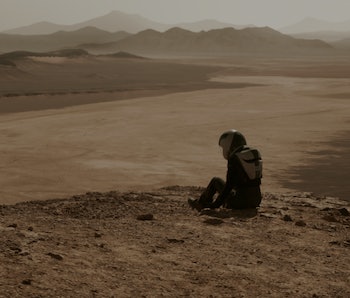 NASA’s InSight Lander’s historic descent onto the surface of Mars on Monday exhilaratingly defied extremely bad odds (only 41 percent of previous probes have made it) in order to probe the interior of the red planet. The latest episode of National Geographic’s docudrama Mars, which airs Monday night, offers an alternative view to Mars exploration — one that predicts everything that can go wrong when government support isn’t as robust as what NASA has recently enjoyed.

In real life, space nerds were overjoyed as InSight, a long-anticipated $813.8-million mission funded by the US government, touched down: NASA’s engineers busted out secret handshakes, Bill Nye got lit on Twitter, and even Mike Pence couldn’t help but call from the White House. But the new second season of Mars sketches out the problems that could arise when the government needs supplementation from the private sector, much as companies like SpaceX and Blue Origin are now starting to help NASA with its output.

On an ideal planet, the government offers scientists full support, as Vice President Mike Pence unexpectedly did in the video below:

In Mars season two, the year is 2042, and astronauts with the International Mars Science Foundation (IMSF) need the private sector to keep their Olympus Town colony going on Mars. Lukrum is a private mining company that’s recently entered the scene, and unsurprisingly, its projects have caused heated clashes with local scientists. Marta Kamen (Anamaria Marinca) is an Olympus Town geologist whose research on Martian life is threatened by Lukrum stomping all over her samples. She’s pissed, of course, but the IMSF’s hands are tied; angry officials tell her to back away from the private company.

Amid all the personal and ethical drama ongoing in the show, this struggle between the government and the private sector stands out as particularly realistic, especially as it’s already playing out in real life. The show’s non-fictional documentary scenes, woven into the storyline, displays the struggle between scientists studying the melting of the Greenland Ice Sheet and the climate change deniers holding back their work (and funding) — many of who have interests in the private sector.

Only time will tell how governmental space agencies like NASA, the European Space Agency, and Roscosmos will form relationships with the private sector, but, at least in NASA’s case, close ties seem inevitable — and at least for now, unproblematic. In a previous interview with Inverse, NASA policy expert John Logsdon, Ph.D., underscored the importance of these companies to the agency’s future success. “I think the renaissance will be very different,” he said, referring to the next chapter of human space exploration. “It will be the private sector doing ambitious things.”

The creators of Mars, a show meant to predict future on Mars based on current events on Earth, seem to believe the same — though they don’t necessarily think that’s a good thing.

Watch how the political and the private clash in Mars episode three, which airs Monday on National Geographic Channel at 9 pm EST.

More like this
Science
Sep. 19, 2022
Mars lander uses seismic data to locate meteorite impact craters for the first time ever
By Kiona Smith
Science
Oct. 2, 2022
Climate change could make one household pest increase its path of destruction
By Lucas Cernusak, Amy Zanne, Alexander Cheesman and The Conversation
Science
Oct. 2, 2022
Even if geoengineering worked, over half the world could keep heating up
By Patrick W. Keys, Curtis Bell, Elizabeth A. Barnes, James W. Hurrell, Noah Diffenbaugh and The Conversation
Related Tags
Share: