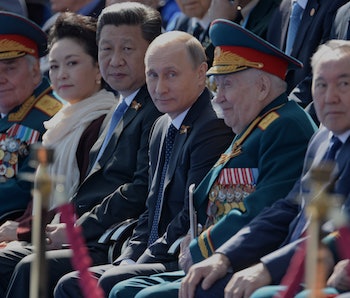 The biggest country in the world is trying to get bigger by setting its sights on the North Pole. On Tuesday, Russia submitted an official claim to the United Nations for permission to take over a 460,000-square-mile piece of the Lomonosov and Mendeleev Ridges, a resource-rich swathe of the Russian continental shelf.

Last October, Sergei Donskoi, the Russian minister of the environment and natural resources, submitted a similar claim to the land but was blocked by the United Nations Convention on the Law of the Sea, the treaty that regulates continental shelf-based land grabs. According to the treaty, countries may claim an area up to 200 miles from their coastline only if the land in question geologically extends from the land borders underneath the sea.

Russia wants the area so badly because estimates say the cold brew real estate could hold five billion tons of untapped oil and gas reserves. But Putin and his pals aren’t the only ones with their hands in the chilly cookie jar. Denmark, Norway, Canada, and the U.S. are also prepped to submit claims for parts of the territory based on the terms of the treaty.

The U.S.’ situation is particularly interesting because they aren’t even signatories of the treaty, but have a natural claim to the Arctic region because of Alaska.

Russia’s push north is of high importance because of the country’s increased militarization, especially in its own Arctic territories. They re-opened a Soviet-era military base in the New Siberian Islands high up in the Arctic Ocean, conducted Navy and Air Force maneuvers over the area earlier this year, and, in 2007, used a submarine to plant a Russian flag at the North Pole.

Kremlin officials say that the moves are purely economic-minded as a way to protect shipping lanes, but most think they’re indications of something more nefarious, something a bit closer to a very cold war.