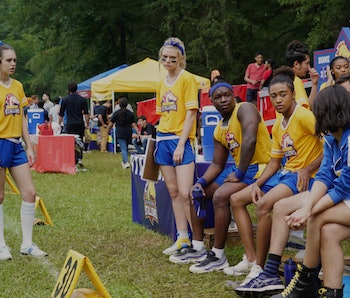 To the town of Mystic Falls, the Salvatore School is simply a boarding school for the “Young and Gifted” on Legacies. Really, it’s a refuge for young supernatural beings. Though they’re told to keep their abilities a secret from the town’s residents, the students haven’t been doing a good job of following that rule — and we’re only three episodes into the series.

Spoilers for Legacies Season 1 Episode 3 below.

In episode 2, “Some People Just Want to Watch the World Burn,” the students played a game of football against the Mystic Falls High teenagers, and they were supposed to not use their powers and lose. “[That’s] a normal school for troubled rich kids thing to do,” Alaric explained. “This annual event lets the locals see you for what they think you are and keeps them from asking too many questions.”

However, Lizzie ignored her father’s order and let her rivalry with local Dana get the better of her. She encouraged her teammates to let loose, and while no one did anything that explicitly screamed “supernatural being,” it was risky.

In episode 3, “We’re Being Punked, Pedro,” the Salvatore School students did community service in the town. MG ran into Dana, and they kissed, but he stopped to compel her to tell him if she really liked him. He was a “good guy,” she said, but she was just trying to make her best friend’s boyfriend jealous. He compelled her to forget they kissed because his mother didn’t raise him to take advantage of girls.

MG later found Kaleb feeding from Dana, and his fellow vampire offered him a bite. After MG turned him down, Kaleb compelled Dana to leave and think she just had a “nasty hickey.” MG agreed to keep his friend’s secret.

Those were little moments that didn’t stand out on their own but could attract the wrong attention and cause someone to take a second look at their school.

That was what happened with Rafael when he was away from the school. He used his werewolf abilities to make himself and Landon money by jumping up to and down from a roof. A werewolf hunter saw and followed them, but Jeremy Gilbert was keeping on an eye on them for Alaric and intervened.

The real problem for the school came in the final moments of “We’re Being Punked, Pedro,” when Dana and her best friend, Sasha, drove there to vandalize it. Sasha stepped into the woods to make a call, and Dana heard her friend scream. Then, something landed on the roof of the car. The episode ended with Dana screaming.

Whoever was responsible and whatever happened is likely going to bring unwanted attention to the school. Suddenly those little moments involving the students from these two episodes aren’t so “little.” Matt Donovan may know what’s really going on, but even though he’s the town’s sheriff, there’s only so much he can do to cover it up.

The students are going to have to be even more careful around the locals, and maybe it would be a good idea to cut back on any field trips into Mystic Falls or around its residents.

Legacies airs Thursdays at 9 p.m. on the CW