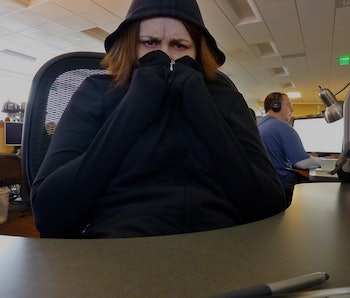 If office building infrastructure could be sexist, a new study in the journal Nature Climate Change makes a strong case for the numbers behind the thermostat. Two biologists at Maastricht University in the Netherlands, Boris Kingma and Wouter van Marken Lichtenbelt, wrote that cooled buildings can be “intrinsically non-energy-efficient in providing comfort to females.”

A formula developed in the 1960s, they say, is the culprit. Ole Fanger, a Danish scientist, invented a way to describe thermal comfort which managers and engineers use to maximize the number of people staying warm. Although the model takes into account factors like clothing and biology, Fanger used thousands of men to create the mathematical formula — meaning this was men’s clothing and metabolism. Specifically, today’s standards are for a 40-year-old weighing 154 pounds.

It’s understandable, then, how women could be left feeling out in the cold. Women, by and large, have lower metabolisms; when Kingma and van Marken Lichtenbelt had 16 women perform office tasks in a sealed chamber — to measure metabolic proxies like breathing — they found the industry standards were overcooling for these women by almost a third.

Plus, if you’re wondering how dressing affects the way we feel hot or cold at work, just let Fontys University of Applied Sciences physicist Joost van Hoof tell you, by way of the New York Times, about “the cleavage,” a disembodied feminine flesh-valley that floats around the office and radiates heat into the air akin to the over-sized ears of certain desert foxes:

“Many men, they wear suits and ties, and women tend to dress sometimes with cleavage,” said Dr. van Hoof, who wrote a commentary about the study. “The cleavage is closer to the core of the body, so the temperature difference between the air temperature and the body temperature there is higher when it’s cold. I wouldn’t overestimate the effect of cleavage, but it’s there.”

How do we fix this imbalance? Short of resurrecting the two-martini lunch (a nice vodka-shield by 2 o’clock, and Snuggies don’t come with olives) we could refine the formula or experiment with more efficient ways of controlling indoor temperatures. Author Margaret Atwood, when painting a picture of a sort of techno-utopia divorced from our need from oil, imagines office workers “using low-draw lightbulbs — incandescents have been banned — and energy-efficient heating systems, including pellet stoves, radiant panels, and long underwear. Heat yourself, not the room is no longer a slogan for nutty eccentrics: it’s the way we all live now.”

Idealistic? Sure. But “cool thyself” is as good a goal as any.