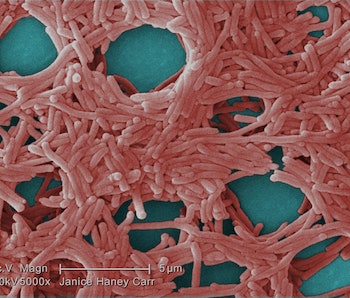 Legionnaires’ disease, the potentially fatal pneumonia spread by bacteria in water droplets, has claimed four lives and infected more than 70 New Yorkers in the past few weeks. The good news is that you can’t get sick from other people, and Mayor Bill de Blasio’s office is trying to quell fears of a wider outbreak by pointing out the drinking water supply is safe. The bad news is that Dr. Jay Varma, New York City’s Deputy Health Commissioner, predicts that the number of cases in the South Bronx will increase over the next week.

Over the next seven days “it is very possible” the number of people infected with Legionella pneumophila will go up, Varma told ABC News. “We are also quite confident that after that time, the number of cases will go down.”

People at particular risk for catching Legionnaires’ disease, so named after a 1976 outbreak at an American Legion convention in Philadelphia, are smokers and older people. The disease is treatable and has a case-fatality rate between 5 to 30 percent. (The rate for the current cluster is just around 5 percent.)

The unusual South Bronx outbreak has been linked to air conditioning towers in five buildings: Lincoln Hospital, the Opera House Hotel, a Verizon office, Concourse Plaza, and the Streamline Plastic Company. The buildings must come up with a plan to prevent future bacterial growth by the end of the week. Health officials are still looking for the main source, which is typically a bacteria-friendly plumbing system like those found in cooling towers, A/C units, hot tubs, or humidifiers.

If you have pneumonia-like symptoms, including fever, chills, and a cough, the New York City Department of Health and Mental Hygiene suggests you call your doctor.