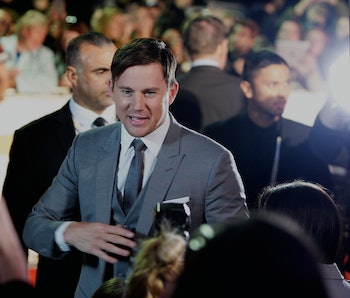 It looks like Channing Tatum’s power move literally paid off. Despite widely circulated reports that Tatum’s deal for the title role in the standalone Gambit movie was unravelling to the point of the actor ditching the X-Men character’s signature trench coat and energized deck of cards, word broke over the weekend that the Magic Mike star is still on board. While the reason for the turbulence has been kept under wraps, leading some prognosticators to speculate that the communication breakdown was part of a maneuver from Tatum’s camp to very publicly lobby for more cash, it doesn’t matter any more since Tatum is an untouchable frickin’ movie star, and he can do whatever he damn well pleases.

So where does that leave us when it comes to the ragin’ Cajun’s solo screen story? Here’s what we know so far.

The British filmmaker came out of nowhere with the 2011 surprise hit Rise of the Planet of the Apes, kickstarting that franchise and putting Wyatt on to the radar to potentially helm every major studio tentpole. Instead of going big for his next project, he directed the 2014 Mark Wahlberg crime drama remake The Gambler. It didn’t particularly light up the box office the same way that his apes did, so he’s back in the blockbuster mood hunting for another hit.

It’s Based on a Treatment by a Marvel Legend.

The plot of the movie is being kept under heavy lock and key, but word is that the initial treatment goes back to the source. Chris Claremont, the Marvel maestro who co-created the character in 1990, penned the proposal for the movie. Fanboys and -girls, rejoice.

It’s Being Written By a Relative N00b.

Fox has taken a chance and assigned the script for the potential franchise-starter to screenwriter Josh Zetumer. Doesn’t ring a bell? Zetumer’s credits include the tepid 2014 RoboCop reboot and a bunch of undeveloped scripts. Not the best pedigree, but it shows that he at least has the wherewithal to manage a pre-existing mythology.

It’s a Passion Project for Tatum.

Tatum has been an actor and producer on the movie for a few years now, which was what made the news of the business troubles so surprising. Gambit is a definite passion project for the actor, who seems to be setting it up and knocking it down in every possible genre he can fit into. Next up: the superhero blockbuster.

Its Producers Are Absolute Ballers.

Producer Lauren Shuler Donner basically birthed the contemporary superhero franchise in 2000 with the original X-Men movie and has fostered that franchise ever since. Another producer is Simon Kinberg, the guy who co-produced the past three X-Men movies and is positioning himself as the new Donner. He’ll also be the guy helping the new untitled Star Wars Anthology movie make it to the big screen.

It Has History Working Against It.

All X-Men and Spider-Man movies aside, the non-Marvel Cinematic Universe franchises haven’t faired so well, and the last time a superhero character got his own standalone movie — the cinematic trainwreck known as X-Men Origins: Wolverine, it was rebooted within four years.

He May Show Up in ‘X-Men: Apocalypse.’

If the movie works, the character will show up in X-Men movies for years to come. But to get audiences prepped on Remy LeBeau a few months before his own movie, he may pop up in a cameo in Bryan Singer’s superhero swan song, X-Men: Apocalypse, next summer. This may be a longshot, but it’d be a good way to give fans a taste of what’s to come.

More like this
Entertainment
Sep. 26, 2022
Christian Bale reveals the secrets of his “weird” transformation in Amsterdam
By Jake Kleinman
Culture
Sep. 23, 2022
You need to watch the best legal thriller of the century before it leaves HBO Max next week
By David Grossman
Entertainment
Oct. 5, 2022
Hellraiser (2022) is the best horror reboot since Halloween (2018)
By Jake Kleinman
Related Tags
Share: