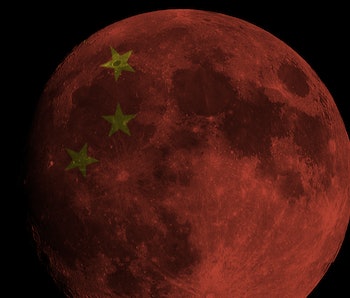 Moonlight might be romantic, but it’s really not all that useful. At only 1-400,000th the brightness of the Sun, the moon is usually not enough to illuminate the night. Chinese scientists and engineers, however, don’t want the residents of Chengdu to have to settle for the dim glow of Earth’s natural satellite. As they announced recently, they can amp up the wattage with an artificial moon blasted into space.

Last week Wu Chunfeng, the chairman of Chengdu Aerospace Science and Technology Microelectronics System Research Institute, announced plans to launch an “artificial moon” in 2020. He was speaking at a national mass innovation and entrepreneurship event held in Chengdu, China. Chunfeng said that the point of the fake moon, technically an illumination satellite, is to replace Chengdu’s streetlights.

According to Chunfeng, the illumination satellite will be eight times as bright as the actual moon. But he also emphasized that it has been designed to “complement the moon at night.” On Earth, its presence will appear as a “dusk-like glow” that can light an area with a diameter of close to 50 miles.

The main driver of this project appears to be cash. As Chinese outlets report, Chungfeng said the second moon will replace traditional energy sources, causing a reduction in energy consumption and contributing to an output value of 20 billion yuan within five years of its launch.

It’s not clear whether or not the project is paid for by the city or the Chinese government, The Guardian reports, but the Chengdu Aerospace Science and Technology Microelectronics System Research Institute is the main contractor for the Chinese space program. China’s space program has matured rapidly since 2015, and the country plans on doubling the number of launches it conducted in 2017 in the coming years.

While this artificial moon project sounds like science fiction, something similar has been attempted before. In 1993, Russia launched its own illumination mechanism, called a space mirror, in an effort to increase the length of the day. It used a giant sheet of plastic attached to a spacecraft to reflect sunlight back down to Earth. For a moment, the device did direct a beam of light down into Russia, but for people on Earth, it only looked like the bright pulse of a star.