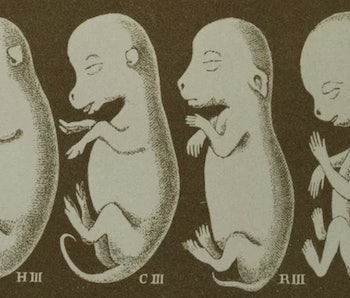 From the early cave paintings in Lascaux in the Southwest of France, painted with hands and hollow bone, to the ethically questionable practice of plastination, humankind has tried to preserve the likeness of animals for millennia. In doing so, we leave behind detailed labors of love and fascination, a snapshot of our scientific understanding at the time.

In an arresting journey in comparative anatomy, Stripped Bare: The Art of Animal Anatomy looks at the insides of animals and reflects back humankind’s relationship with them and ourselves, from antiquity to today. Author David Bainbridge, University Clinical Veterinary Anatomist at the University of Cambridge, unlocks new ways of seeing through his exquisite descriptions of this stunning collection of illustrations.

From Charles Darwin’s voyages, to Edweard Muybridge’s cockatoo time-lapses, Bainbridge explores the philosophical, scientific, and artistic settings that informed humanity’s ongoing pursuit to understand the curiosities of nature around us.

Below is an excerpt from Stripped Bare, published last month by Princeton University Press.

Ernst Haeckel, Professor of Zoology at Jena, was an unusual person—a traveler-savant, embryologist, artist, ultra-Darwinist, and self-promoter who even expounded his own pseudo-religion premised upon his ideas of development, evolution, race, and religion.

Haeckel’s scientific and artistic output was profuse, from the watercolors of his youthful wanderings around the globe to his later sharp engravings extolling the patterns and geometry present in the animal kingdom. As well as being a working scientist, he was also a hugely successful popularizer of science, his many books selling worldwide, and he traveled around Europe with his roadshow of skeletons, embryos, and diagrams. Few have so successfully used their art to impose scientific opinions on future generations.

Haeckel’s life changed when he read Darwin’s On the Origin of Species, and there followed an uneasy scientific correspondence between the cautious, cerebral Darwin and his argumentative, bombastic protégé. Haeckel pushed the theory of natural selection further than anyone else by firmly binding it to his own main field of study, embryology. In the nineteenth century, many biologists already realized that evolution and development must be linked in some way, but it was Haeckel who claimed they were directly equivalent processes.

According to his Law of Recapitulation, every animal passes through all the stages of its evolutionary history as it develops as an embryo — thus humans would be said to go through single-celled, wormlike, fishlike, reptilelike, shrewlike, and monkey-like phases before becoming truly human. This idea may seem strange now, but it has been repeated to biology students ever since, even though it was largely refuted in the 1920s.

So potent was the idea that it imbued a spurious sense of “progress” into evolutionary biology that was scientifically misleading when used to claim, for example, that monkeys are more “advanced” than sharks. But when Haeckel used his theories to claim that Europeans are superior to other humans, or that Judaism is an inferior, primitive forerunner to Christianity, one can sense the seeds of Nazi racial policy being sown.

Stripped Bare: The Art of Animal Anatomy is available now.

More like this
Science
7.31.2022 1:00 PM
How do cats co-exist with each other? The answer may lie in their gut
By Tara Yarlagadda
Science
8.10.2022 3:00 PM
Watch sea sponges sneeze out stringy mucus in slow motion
By Jennifer Walter
Science
8.9.2022 10:30 AM
Is my dog depressed or happy? Pet experts explain how you can tell.
By Tara Yarlagadda
Related Tags
Share: