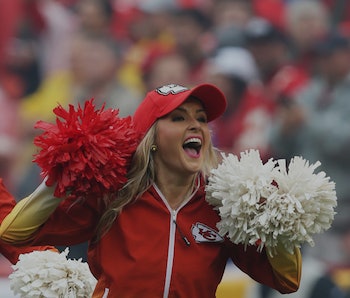 This could be a preview of the AFC title game.

Then again, we’ve been here before. The Chiefs opened last season by laying the smackdown on the Patriots, fresh off of their tragic historic come-from-behind win over the hapless Falcons in Super Bowl LI. Both teams made the playoffs, but the Chiefs bowed out in the wild-card round, while the Patriots made yet another appearance in the Super Bowl before falling to the Eagles. Once again, reports of the Patriots’ collective demise were greatly exaggerated.

After New England started 1-2, similar whispers began surfacing across the interwebs this season, praying for the end of the infernal dynasty. Oh, no you don’t. Not again. After harpooning the Dolphins and whooping up on the Colts in the DeflateGate Bowl last Thursday night, the Patriots are back on track and have had an extra few days to prepare for the Chiefs and Andy Reid’s high-octane offense. With the return of Julian Edelman and Josh Gordon’s continued increase in playing time, the Patriots have also rejuvenated their receiving corps. The Death Star is, once again, fully operational.

What – if anything – you ask, could be different about this year’s Chiefs? Here’s your difference-maker: Patrick Mahomes. The first-year starter has set the NFL on fire, breaking all kinds of records and leading Kansas City to an undefeated record. Make no mistake about it – this is the game of the week. Belichick vs. Reid. Brady vs. Mahomes. Old school vs. young blood. The GOAT vs. a frog. Hope springs eternal. Chiefs 31, Patriots 27. But how do a hive-mind of NFL fans think it will turn out?

To predict the result of this Week 6 match-up, Unanimous A.I. used what’s known as swarm intelligence to forecast the week’s slate. Thirty-four NFL enthusiasts worked together as a hive mind to make picks. As you can see in the animation below, each participant controlled a little golden magnet and used it to drag the puck toward the answer they thought was the most likely outcome. As the users saw the puck move toward a particular decision, it triggered a psychological response. They readjusted their decision-making, building toward the consensus you see below. It’s an artificial intelligence produced by human brains working together as a swarm.

As you can see the swarm disagrees with my own prediction, with 34 NFL experts collectively choosing New England as the winner but with the “low confidence” option. It should be a tight game.

The Chiefs play at the Patriots at 8:20 p.m. Eastern Sunday on NBC.