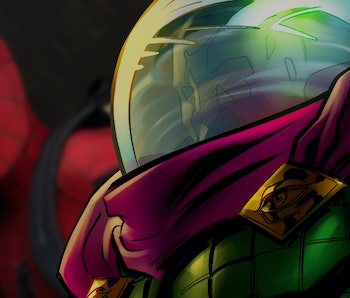 Mysterio is entering the Marvel Cinematic Universe, but he’s missing the most important thing to his costume: Where is his dang fishbowl helmet in Spider-Man: Far From Home?

On Sunday, photos of Jake Gyllenhaal, previously rumored to play Mysterio in the next Spider-Man film, Spider-Man: Far From Home, surfaced online with the actor in costume. The pictures were taken from the film’s set, which is currently shooting in Liberec, Czech Republic.

Although the viral photos are blurry, it’s still possible to make out Gyllenhaal’s costume — a green electronic suit and a purple cape — undeniably proving that Gyllenhaal is Mysterio.

“But wait,” you might say if you’ve read the comics or grew up watching Spider-Man: The Animated Series on Fox Kids, or both. “Where is his big fishbowl helmet?”

I don’t know what the filmmakers or costume designers have in mind to get around the most iconic yet most cinematically prohibitive piece in the villain’s wardrobe. But given that these are the same folks who came up with electronic lenses to give Spidey expression with his mask, I trust there will be a clever way of allowing us to see Gyllenhaal’s face (which studios pay a tremendous amount for) while still ensuring his character looks like a Steve Ditko drawing.

Introduced in issue #13 of The Amazing Spider-Man, Mysterio is Quentin Beck, a Hollywood effects wizard who tried and failed to become an actor.

Upon realizing he could weaponize his gifts for illusion to become a master of crime, he did just that, turning himself into the elusive villain Mysterio. He later became a founding member of the Sinister Six, joining Doc Ock, Kraven, Sandman, Vulture, and Electro in a collaborative effort to kill Spider-Man.