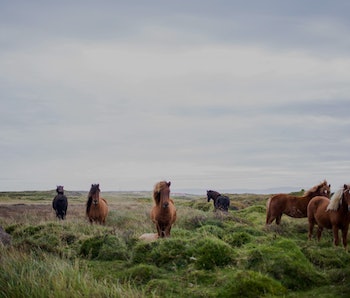 The wild horses of North Carolina’s outer banks are iconic symbols that inspire widespread adoration — but they are also standing directly in the path of hurricane Florence. The storm that’s already prompted massive coastal evacuations, Florence will likely take a toll on these horses’ beach retreat home. Evolution has left these horses well prepared to weather the storm.

“Horse’s instincts are pre-coded by their genetic makeup,” Jerry Black, DVM, and the director of equine sciences at Colorado State tells Inverse.

His expertise is on the wild horses of the western United States, but he also adds that feral horses in general are pretty good at recognizing danger, and escaping it.

“The feral horses are in survival mode all the time,” he continues. “They’re a flight animal, a passive herbivore meaning that their main mechanism of protection is flight.”

Related video: Wild horses along the Salt River in Arizona

This seems to already be playing out in North Carolina. Wildlife biologist Sue Stuska told the Associated Press that she expects the horses of the Cape Lookout National Seashore to head for high dunes to avoid flooding, and maritime forests to seek shelter form high winds.

Black adds that domestic horses have this flight tendency too, but this doesn’t mean we should rely on their instincts alone to get them to safety. Out in Colorado, when unpredictable approaching wildfires make it impossible to evacuate, people will often turn their horses loose. But in the case of a hurricane, the horses may cover more ground if properly evacuated with their humans.

But for those unfortunate domestic horses that do get left behind, there are a number dangers that face them. For example poorly constructed stable buildings which could blow debris into their wake, or rising flood waters may pose risk of skin infections if they’re left standing in dirty water for too long with no means of escape.

One potential candidate for this is a skin infection called “rainrot” which is caused by the bacteria Dermatophilus congolensis. Wet conditions make horses particularly susceptible to infections from the bacteria which create a scabby appearance on the skin. Fortunately it’s not life threatening, but it is certainly uncomfortable.

The wild ones on the other hand will need to use their carefully honed survival instincts to head for safer pastures. As long as there’s a dry highland somewhere, odds are they’ll find it.