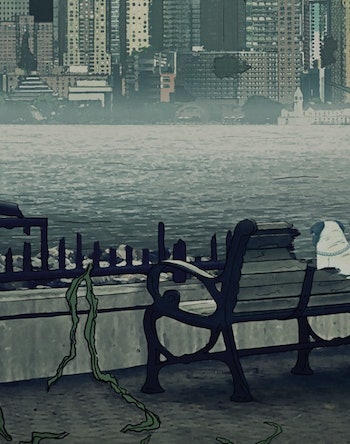 HBO’s Animals has always felt different from everything else on TV. The anthology-style cartoon (created by Phil Matarese and Mike Luciano, and produced by the Duplass Brothers) tells quick, hilariously-inappropriate stories about the lives of rats, pigeons, bugs and other animals, all against the backdrop of modern-day New York City. But Season 3 is really different.

It all started at the end of Season 2, when Dr. Labcoat (a human scientist played by RuPaul) unleashed a chemical apocalypse on Manhattan. As Season 3 begins, humans have evacuated the island, leaving the remaining animals to take over. The result is a new map of the city with neighborhoods like Rat Town, Ye Old Horseburg, Pigeon Heights, and the North Korea-inspired Democratic People’s Republic of Kitty City. There’s also a mysterious floating orb at the site of the initial explosion with the power to give life to inanimate objects (see Episode 5, “Stuff”).

In an interview with Inverse, Matarese and Luciano (who show up as some different animal version of Phil and Mike in pretty much every episode of Animals) talked about how they turned the series into a post-apocalyptic sci-fi story for Season 3, why cats are evil, and what it was like working with Tracy Morgan (who plays an animated toaster in “Stuff”).

Season 2 laid the groundwork for Season 3’s post-apocalyptic plot, but is this what you always had in mind? How long have you been thinking about an animal-controlled version of New York?

Phil: It’s something we’ve had in our back pocket for a while now. We knew we didn’t just want to be a talking-animals-in-NY show. Even in Season 2 with the side plot elements and having the human live-action show and how it ended. That was us easing our audience into the idea of how this could go into less of a sketch show. A long time ago, we said, “OK, the six seasons of this show, what could they be?” We just like to mix it up every season.

Wait, does that mean we’re getting six seasons of Animals?

Phil: That’s more of a random number, but six seasons is a good number for television.

There’s a lot of mystery surrounding the Democratic People’s Republic of Kitty City. When will we get a closer look at this part of the New York? Is there a kitty equivalent to Kim Jong-un?

Mike: We do get a look into that. That’s our eighth episode of Season 3. That episode is about the rats Phil and Mike venturing into a part of the city where no other rats dare go.

In our first season, we had an episode called “Cats” that featured Phil and me as these two white furry cats living in a highrise. They’re very innocent and cuddly, but at the same time very chaotic and terrifying. They were fun characters. We didn’t return to them in Season 2, but it felt appropriate to return to them as the dictators of the Democratic People’s Republic of Kitty City. It became fun to ask, “What do these psychopaths do with their section of the city?”

It makes a lot of sense that dogs would take the absence of humans the hardest. How do you decide how each animal will adapt? Why do the horses break down into a class-based society so quickly?

Phil: I think they ended up being a reflection of their existence while humans are in the world. So the dogs are so humanity-dependent that they would probably have a dependency problem once they were gone. As for the horses, the existence of horses in New York City with humans around is pure servitude. The central park horses just have this terrible life. So maybe when the humans are gone that’s all they know, that sort of lifestyle. Also, just the idea of carriages and they’re all sort of dressed up in this odd medieval way. Once you piece those things together, that kind of vibes it out. We just followed these breadcrumbs into the story.

The rats were more of less living in the cracks of humanity when humans were around. So they’re gonna come around and do their own damn thing. And cats are crazy.

Where did you come up with the idea for the “Stuff” episode? Was it inspired by The Brave Little Toaster?

Phil: A little bit. We knew we wanted to do try to do this. We had this cool magical core of the season, this thing called the Orb. We just wanted to bring some stuff to life and do some quick tight fun. It’s a true ensemble story, not just another “this is Phil and this is Mike” episode.

Tracy Morgan plays an angry, animated toaster in that episode. What was is like working with him?

Mike: So funny. After the first few seconds he just burst into joke after joke after joke. So fucking funny. We were in tears the entire session. He was game for everything.

Phil: A lot of his stuff we didn’t write, like, “Hot blooded say what the popcorn.” It was above and beyond what you would expect. And 10 degrees more than that even. Truly one of the highlights of making the show.