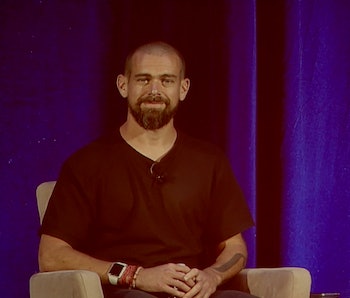 I’ve thought a lot about the clothes I would buy if money were no object: Linen suits (so hard to maintain!), cashmere sweaters (occasionally defensible if you really work the sales), and a camelhair topcoat (preferably Brooks Brothers) all come to mind. This materialist form of escapism obviously isn’t that unique, but it does seem like a joy that’s lost on the world’s most influential technology CEOs. Take the example of Twitter’s Jack Dorsey who, it seems relatively uncontroversial to point out, often dresses like shit.

Dorsey really drew eyeballs with his outfit to his Wednesday Congressional testimony about the role of social media in election manipulation. Quartz’s Mike Murphy probably characterized it best when he captioned a Reuters photo of the regrettable ensemble, which he described as a “vampire shirt collar, confederate soldier beard, and nose-ring combo.”

Maybe it’s just that I can practically feel the reverberations of my Southern mother’s hypothetical tongue lashing if I even mentioned the possibility of showing up to a Congressional hearing without a tie, but I’ve always found the all-star founders and their perceived ambivalence about apparel to be puzzling. Stores are obviously stressful, but can’t these dudes spring for a personal shopper? Give Tan France a call? Spend a weekend putting together a few failsafes?

We’re picking on Dorsey, but he’s hardly the outlier here. Evan Spiegel from Snap was famous for his V-necks, Mark Zuckerberg showed up to that important investors meeting in pajamas, and Theranos founder slash queen of scams Elizabeth Holmes famously wore the same black turtleneck every day so she could look like Steve Jobs (Zuckerberg in particular had to pay big for that apparel choice when, a few years later, those same investors had to sign off on his acquisition of WhatsApp.)

One interesting theory about why more powerful people are dressing terribly comes from a 2016 paper from researchers at Columbia Business School, Harvard, and Georgetown. Essentially, dressing well has faded out of fashion in favor of other, more compelling ways of signaling status. And while there are plenty of compelling arguments for getting rid of country clubs, unrealistic beauty standards, fuel-guzzling convertibles, and diamonds, it’s hard to love what these status markers are being replaced with, either: the absence of leisure time.

It’s easy to see how underdressed powerful people are a symptom of this phenomenon. Don Draper signaled status with his perfect clothes, his amorous escapades, and by saying things to women like “It’s Chinchilla, and it costs $15,000. How does that make you feel?” Zuckerberg asserted his power by pretending like he was too busy to have time to get out of his PJs.

The CEO who dresses like shit is a symptom of a society that increasingly emphasizes preciousness and scarcity of individuals instead of the preciousness and scarcity of goods. There may be a degree of inevitability here. After all, people aren’t wrong to be more impressed by the person that’s always too busy to see them than they are by the person with the nice watch. You can inherit a watch, but you can hardly inherit a 100-hour work week. And yet the payoff of this trade, at least according to the Columbia paper, is underwhelming: instead of ostentatious wealth we get endless flakiness and performative over-work. Great.

This might be a lot to lay on Dorsey over his decision to skip the tie. But it does go to show that while it’s crucial to dismantle the gender and class barriers that shape standards for appearance and formality, we should also be more aware of what’s replacing these standards.

Business casual seems like a fair trade for civilized working hours and some occasional time off.