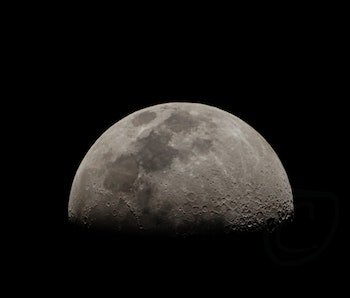 No man saw the dark side of the moon until 1959, only a decade before Neil Armstrong jumped down onto the celestial surface. And we still know startling little about the shy half that rotates around us without ever showing itself. Here’s what we’re sure of: It’s dark and it’s quiet; quiet enough, presumably to allow moon-based researchers to listen in on radio signals from deep space. Now that the European Space Agency is proposing to build a moon village and giant telescope on the far side of the sphere, the question isn’t so much what we’ll find there as what we’ll be able to seeing and hear of the great beyond.

Many of the signals we want to pick up on are faint because they’re very old. The “Dark Ages” refer to the half-billion year period that occurred right after the Big Bang, a time when the universe was literally nothing but hydrogen and helium. Neutral hydrogen atoms, those that weren’t electronically charge, occasionally went through a transition called a “spin flip,” which released a radio signal into space. Those signals, which are still traveling through the universe, are our only hope for learning anything about this prolonged period. Problem is, the oldest signals have a super-low frequency. Picking them up from Earth is nearly impossible. Even the signal given off by your remote control can get in the way.

We learned how hard monitoring those frequencies can be the hard way. The 13,000 square mile “National Radio Quiet Zone” in West Virginia lets researchers study some of these signals, and the Murchison Widefield Array in Western Australia can pick up on the ones above 100 mHz, which tells us what was going on about 400 million years after the Big Bang. But to go deeper into time and space, they need to get below 100 mHz.

Researchers are hoping that signals from the Dark Ages will tell us about recombination — how the original electrons and protons came together to become the first hydrogen atoms — as well as the process of reionization, which is how matter started coming together into stars and galaxies. Some even hope that it’ll be quiet enough on the far side to pick up on alien communication.

If that sounds implausible, the installation still might not be.

Back in 2008, astronomers at the U.S. Naval Research Laboratory proposed putting a giant telescope, the “Dark Ages Lunar Interferometer”, on the far side of the moon, but this project didn’t get off the ground. Ditto for a similar idea NASA was looking into in 2013. In order to get the right sort of telescope, really an arrays of antennae, in the right spot, NASA would have had to launch mission after mission and pay through the nose. In order to do science on the moon, you kind of need to be on the moon.

What would really help is having a permanent base on the lunar surface, a human-filled station like the one the ESA thinks we should build. With that sort of continued presence, astronauts could install telescopes, do maintenance, and generally look after whatever we erect in the shadows.

Until we find a way to set up shop out there, the dark side of the moon — and everything it can reveal to us about our past — remains as mysterious as the sounds of the deep past, the ones we can’t quite hear.