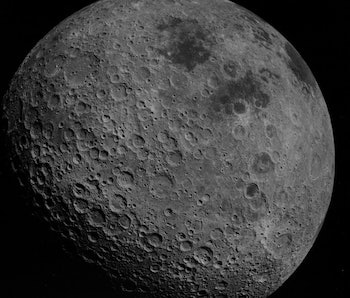 UPDATE: When the European Space Agency’s new chief Johann-Dietrich Woerner announced his plans to build a village on the moon last week, people were mildly amused and very skeptical. It’s clear from his recent interview with Nature, however, that he’s dead serious. And now it looks like NASA, which has been focused on getting to Mars, wants in on the moon party as well: A recent study funded by the American space agency has shown that building a permanent moon base won’t cost nearly as much as previously thought. We might be a lot closer to building a moon village than we previously thought.

Clarifying the term “moon village”, Woerner told Nature that it’s less about setting up a little town and more about building an international research station involving private companies and space agencies alike. This permanent base could be used for both lunar and cosmological research and could someday act as a space tourism stop or launchpad for missions elsewhere in space. Again, he emphasized the importance of settling on the Moon before even attempting trips to Mars.

A point he kept coming back to was potential for space research to bring countries together. “I strongly believe space has a bridging function and we should use it,” Woerner said in the interview. International cooperation wouldn’t just provide a greater funding pool — it would also give scientists from different countries an arena to come together in a space “jam session” to come up with even better ideas.

Meanwhile, the NASA-commissioned study on the actual cost of building “lunar architecture” on the moon came as a bit of a surprise, given the space agency’s focus on Mars. The study reports that returning to the moon could cost up to 90 percent less than what was first estimated. The costs for NASA to set up a permanent base on the moon were initially estimated at $100 billion, but, after factoring in funding by private companies, partnerships with international agencies, and the potential profits from moon mining, that number came down to $10 billion, which for NASA, is manageable even now.

The study reports that NASA could save (or make) a lot of money by reaping the Moon’s natural resources — specifically, the frozen water at its poles. If they can figure out how to mine this water, it could be broken up into hydrogen for propulsion fuel and oxygen for astronauts to breathe.

Neither the ESA nor NASA has any specific plans for a moon village yet, but it’s clear both agencies are serious about conducting more lunar research. Only time will tell whether or not they’ll team up to do it.

July 14, 2015: Only a week after his ascendance to the top spot at the European Space Agency, Johann-Dietrich Woerner is already making moves. Big ones. Sure, he’ll deal with all of the usual space stuff — launching satellites, getting astronauts to the International Space Station, planning trips to Mars — but his dreams for the ESA are next level: He wants to build a village on the moon. Is this completely insane, or is his plan feasible?

First of all, Woerner has a €4.4 billion annual budget, so if anyone’s going to make this happen, it’s him. These days, NASA and Russia’s space agency Roscosmos are channeling their money into a 2030 mission to Mars, but Woerner thinks that money would be more wisely spent on the moon. He makes a very good point: Why would we go to Mars without first testing all of our equipment and methods somewhere much closer?

Setting up camp on the far side of the Moon, he says, would let us test out all of the equipment we plan to use on Mars — like 3D-printed homes — while also setting up telescopes looking into deep space. And if anything goes wrong, the Moon is only four days away; whereas, it’d take us 6 months to get help to Mars.

Everyone is invited to Woerner’s space village. In his interview with the BBC, he emphasized the moon village’s potential for international cooperation. “We have enough Earthly problems between different nations,” he said in the interview. “Space can bridge these Earthly problems and the Moon seems to be to be a good proposal.” This means opening up the project to the U.S. as well as Russia and China, who NASA refuses to cooperate with in space.

Woerner isn’t, however, the first person to dream up a moon village. Last year, Russia’s Deputy Prime Minister and resident Internet troll, Dmitri Rogozin, revealed Russia’s plans for a permanent moon settlement. “We are going to come to the moon forever,” he told Sputnik News. It doesn’t make sense, according to Rogozin, to spend money going back and forth between the moon. Why not build a settlement there and use it as a research lab and launchpad for future space missions? Doing so would also allow Russia to mine the moon for natural resources to use in future space missions — or even send back to Earth. Rogozin, like Woerner, is the head of his nation’s aerospace program, so as wild as his plans seem, he too is in a position to make them happen. Woerner better hope Rogozin is open to the idea of an international space village; if he’s not, he’ll inevitably have to deal with a lot of issues surrounding lunar real estate.

Both Woerner’s and Rogozin’s moon villages are still very much in the proposal phase. But they are not screwing around.