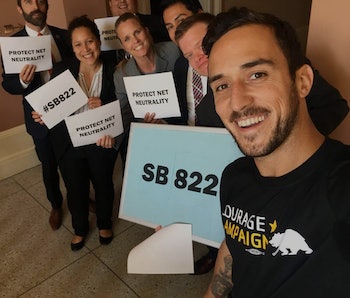 California’s wide-reaching net neutrality bill passed the state assembly on Thursday, in a major victory for campaigners that hailed the bill as the best state-level action in the country. Bill SB822 will now go to the Senate before passing to the governor for signing into law.

The result came as something of a surprise based on public support. In the day before the vote, campaign group Fight for the Future listed 22 assembly members supportive versus 58 unsupportive. In the third reading vote, 61 voted in favor and 19 against. The vote fell largely along party lines, with six of the 25 Republican members voting in favor and none of the 55 Democratic members voting against.

Campaigners have focused on passing legislation at the state level to mitigate the effects of reversing net neutrality. The FCC, led by Ajit Pai, voted to reverse the 2015 decision to treat the internet as a Title II utility similar to landline telephones. A total of 36 states have some sort of legislative action in process, while 22 state attorney generals have taken legal action.

California’s result came after a passionate debate on the role of government in the internet markets, the effect net neutrality has on people’s lives, and the question of the federal government’s role in guaranteeing protections for consumers.

“The one thing that these companies say is ‘we don’t block, we don’t throttle, we don’t do these things’,” assembly majority leader Ian Calderon declared in a speech prior to the vote, invoking the story of the Santa Clara fire department that found its internet connection throttled by Verizon amid state wildfires, an issue that Verizon claimed had nothing to do with net neutrality. “They clearly do it. It’s an issue that hit the firefighters that are fighting to protect our constituents’ homes.”

Fight for the Future hailed the bill as strong protection against the worst effects of net neutrality in the lead up to the vote:

The group is now urging people to call the California Senate and ask them to pass SB822, warning that internet providers will be lobbying senators to vote against the bill. The Senate is currently comprised of 25 Democratic senators and 14 Republican senators, and Fight for the Future plans to release a scoreboard of where they stand on the issue.