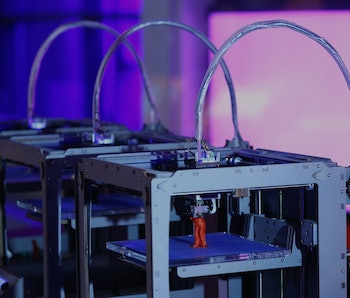 Despite suffering questions over their relevance, libraries are doing a better job than a lot of industries adapting to the digital age. Case in point, the Washington D.C. Public Library’s Fabrication Lab, offering 3-D print tech, laser cutting, and music recording software to the public.

Washington City Paper reports the lab started with a single 3-D printer in 2013 before growing to a row of eight. Space and time are free and the 3-D printer filament can be had through the library at cost to build anything from a cup holder that fits on a bike handle to a wooden box laser-cut with kitten pictures. 3-D scanners and the equipment to build are usually cost prohibitive for the home studio. This levels the playing field for any artists to play in the new mediums and attracts teens who could be the next Kanye if you give them the tools to lay their tracks down. There’s room to fit a five-piece band and it could even be used for podcasts and oral history projects.

Libraries have taken a catholic philosophy to serving communities they rarely get credit for. The Ann Arbor District Library offers musical instruments, fishing poles, tools, and telescopes. Some Iowa institutions have been known to lend out cake pans and VCRs. There are some things you just can’t download.

More like this
Culture
Sep. 15, 2022
The cults that survive even when the prophecy fails
By Peter Ward
Culture
Sep. 15, 2022
5 years ago, Nicolas Cage made his most disturbing movie ever
By Laura Kelly
Culture
Sep. 23, 2022
You need to watch the best legal thriller of the century before it leaves HBO Max next week
By David Grossman
Related Tags
Share: