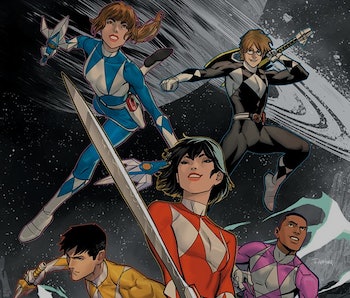 One of the most iconic things about the original Mighty Morphin Power Rangers is changing after 25 years: the color scheme.

In an upcoming issue of Go Go Power Rangers, one of the two best-selling ongoing Power Rangers comic books from BOOM! Studios, all the Rangers swap colors. And Trini, the Yellow Ranger, will be taking charge as team leader, becoming the new Red Ranger.

In the covers for issues #14, #15, and #16 of Go Go Power Rangers, all of the original five Power Rangers swap their colors and weapons (and maybe their Zords, too) in a remarkable way that actually redefines the rules of being a Power Ranger. The Pink and Yellow Rangers will be taken over by the guys, while the Red and Blue Rangers will become the girls.

It’s all very exciting and reinforces the baked-in progressivism that has been associated with Power Rangers for over 20 years.

Because this can easily get complicated, here’s a quick breakdown of the full switcheroo:

Details of the storyline involving the switcheroo have yet to be fully revealed, but it all begins this October in issue #13 of Go Go Power Rangers, the first issue following the end of Shattered Grid.

Go Go Power Rangers #13, the first issue after Shattered Grid, will be released in October.