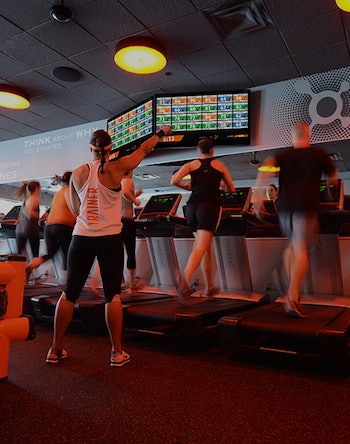 As fitness franchises battle for that one hour a day most of can tolerate working out, it’s helpful to know which companies are delivering the most physiological gains per minute. Orange Theory, a program touted among the best-hour long workout classes in America by Men’s Journal, has led the pack recently, boasting a scientifically driven interval training method that claims to maximize the calories one burns after a workout is over.

The company’s astounding growth rate suggests that customers are satisfied, but experts are not sure it can deliver on all it’s promises. The company has more than 900 locations in 48 states and 17 countries, reported Franchise Times in April. It had another 54 lease agreements and 34 franchise agreements in its pipeline at that time, too.

The Orange Theory is based on a concept in exercise physiology called post-exercise oxygen consumption (EPOC) — colloquially called the “afterburn.” The idea is that, if a person maintains a certain maximum heart rate during a workout, they will continue to burn calories long afterward through an oxygen-burning process.

The Five Zones of Intensity

A typical Orange Theory class lasts around an hour and is based on achieving certain “target” heart rates that kick EPOC into action. Those target heart rates, based on a person’s maximum heart rate, fall within five “zones” of intensity. Zone one is the easiest, zone five is the most intense, and zone four is the “orange” zone for which the program is named; if executed correctly, zone five should be unsustainable for longer than a minute or so. Orange Theory claims it has found the right combination of these zones to maximize EPOC: 25-30 minutes in zone two or three, and 12 to 20 min in zones four or five.

“Those durations seem reasonable, especially since quality high-intensity work cannot be maintained for a long duration,” Jeremy Townsend, Ph.D a kinesiologist at Lipscomb University who has studied EPOC, tells Inverse.

Townsend says that the program could be improved, though: “Orange Theory’s training zones are based off percentages of maximum heart rate, so if an exercising individual wants to maximize EPOC, it would be suggested that they try to enter those higher zones four and five which correspond to a higher intensity and longer EPOC,” he adds.

Townsend explains that the concept behind EPOC is that high-intensity work — that done in zones four and five — create an “oxygen debt” that requires work to repay, even after the workout is over. This, potentially, is the fitness holy grail — free aerobic gains while you lay on the couch and recover.

The longer you spend in these high-intensity zones, says Townshend, the longer this “afterburn” seems to last, but the question remains: for how long? If Orange Theory is to be believed, it can last up to 36 hours.

Scientists have been working to answer this question since the early 1990s, and have attempted to investigate what combinations of exercise extend this period of “free gains.” This has been hindered by the fact that the research methodology has been all over the place, explains University of New Mexico exercise scientist Len Kravitz, Ph.D., who was among the first to investigate EPOC, to Inverse. Furthermore, there are only about six universities in the country that have “metabolic chambers” that can control variables precisely enough to determine the true effect of intensity on EPOC.

Given these challenges, Kravitz says that it’s hard to determine how long the afterburn actually lasts, but in his opinion the “best study in the field” was published in 2011 in Medicine & Science in Sports & Exercise. This test, carried out in a metabolic chamber at Appalachian State University, showed that 45 minutes of exercise above 73 percent of VO2 max resulted in 14 hours of EPOC in ten male subjects. VO2 max, a measure of how efficiently your body can process oxygen, is the metric most studies on EPOC use.

Orange Theory’s strategy for optimizing EPOC is based on maximum heart rate, however, so to compare it to the scientific literature one must perform a conversion between VO2 max and maximum heart rate. There’s no gold standard for this calculation but the “Miller et al. method,” established in 1993, provides a useful equation for relating the two.

Applying the Miller et al. method to the 2011 results shows some consistency with the Orange Theory. The study’s finding that 73 percent of VO2 max is the sweet spot that athletes must hit to maximize EPOC for 14 hours, when converted, suggests that an athlete must hit 84 percent of maximum heart rate to get the same result. Interestingly, 84 percent of maximum heart rate is exactly in the “orange zone,” which the company says will maximize EPOC.

However, the big difference is that the 2011 paper suggests that achieving a 14-hour afterburn requires 45 full minutes in the “orange zone.” A typical typical hour-long Orange Theory class, however, likely won’t have you working out at that intensity for that long. So, while Orange Theory’s promise of a 36-hour afterburn might seem like an exaggeration, what happens after one reaches the “orange zone” is based on robust science.