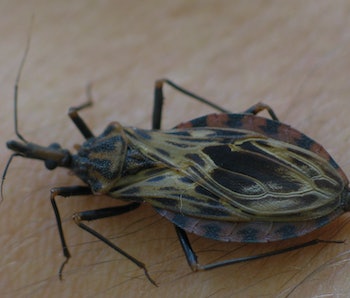 A parasitic disease commonly transmitted in the feces of a bloodsucking insect in South America, Central America, and Mexico now affects an estimated 300,000 people in the United States, according to a scientific statement from American Heart Association scientists. Though the illness, called Chagas disease, can cause heart failure in serious cases, it has received little attention in North America. Now, warn the researchers in the journal Circulation, it’s time for doctors to be vigilant.

Chagas is transmitted by a parasite called Trypanosoma cruzi, which dwells in the feces of Triatomine bugs. Also known as “kissing bugs.” Triatomines are native to Central and South America but have slowly been spreading northward for over 40 years. Currently, Chagas disease affects some 300,000 Americans, but that number could rise. The US Centers for Disease Control has confirmed sightings of kissing bugs throughout the midwestern and southern states, but Dr. Maria Carmo Pereira Nunes, a co-author of the report, tells Inverse that there are a few states that are particularly at risk, including Texas, New York, Florida and California, which she says have each documented over 10,000 cases of Chagas disease.

“Many physicians consider Chagas to be a disease that is restricted to Mexico and Latin America, and this assumption causes general practitioners in the United States and Europe to ignore the condition when making a differential diagnosis of cardiomyopathies,” she says.

These bugs are pretty nightmarish. They’re called kissing bugs because they bite humans on the lips and eyes, according to researchers at Texas A&M, which causes local swelling and opens up a small wound. Biting in itself doesn’t cause Chagas disease; it’s passed on when a person is bitten by an infected insect and then the bug happens to poop near the area where it bites you. Fortunately, not all kissing bugs carry T. cruzi](http://kissingbug.tamu.edu) — Texas A&M estimates 55 percent of them are infected — and the new report notes that between 60 and 70 percent of people infected with Chagas don’t develop any symptoms at all.

The initial symptoms that the CDC are pretty nondescript, including fever, fatigue, body aches, headache, and rash. Upon physical examination, a doctor might find that an infected person’s liver, spleen, or glands are enlarged, and there’s usually telltale swelling at the site of the bite where the bug poop got rubbed in. Though these symptoms often go away on their own, the T. cruzi infection lingers and can cause much more serious damage if left untreated.

Serious infection can actually change the muscle tissue in the heart, causing it to enlarge in about one-third of cases. This condition, cardiomyopathy, can lead to potential heart conditions down the line, like stroke. In some cases, it can mean sudden death .

In Latin America, there have been successful campaigns to control the spread of kissing bugs. The new report specifies that a subspecies of kissing bugs, Triatoma infestans, has been eliminated from Uruguay, Chile and Brazil and controlled in some areas of Peru and Paraguay through periodic insecticide spraying. But this isn’t always a perfect solution, note researchers in a 2015 Acta Tropica paper showing that the insects have been able to develop immunity to some insecticides. For example, two different populations in Argentina and Bolivia developed speedy metabolisms that were able to quickly process and survive the spray.

Because nature is so devious and resilient, Nunes places even greater emphasis on detecting the disease early. An early diagnosis can help streamline potential treatment and even cure an infected person with a 60 to 90 percent success rate before infection can result in cardiac enlargement. All cases, however, must be confirmed before treatment can be prescribed, and the authors of this paper are worried that the US doesn’t have enough widely available testing sites.

“Healthcare providers and health systems outside of Latin America need to be equipped to recognize, diagnose, and treat Chagas disease and to prevent further disease transmission,” they write.

With this in mind, it’s paramount that people seek treatment early if they recognize potential signs of the disease. In addition to staying on the lookout for the early signs of Chagas, Nunes adds that people — especially those who have been bitten — should be on the lookout for advanced symptoms by monitoring their bodies for rapid heart palpitations or swelling in the legs, ankles, and feet.