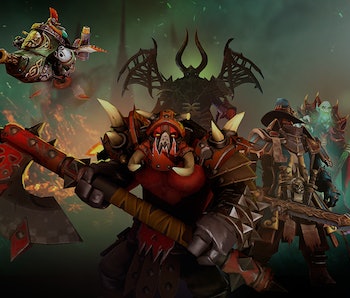 OpenAI is gearing up to wow the world of esports this week, with an appearance at the eighth-annual “International” Dota 2 championship, organized by game developers Valve. The non-profit AI research company, co-founded by Elon Musk and Sam Altman, has made a name for itself by beating humans at their own game.

The “OpenAI Five” is a team of bots that’s been trained on the equivalent of 180 years’ worth of Dota 2 games, using 128,000 processor cores and 256 graphics processors to train on what’s called “Proximal Policy Optimization.” The strategy video game is one of the largest in the world, boasting over 10 million monthly active users. It requires players to work together in teams of five by choosing heroes from a list of more than 100 to destroy the opposing team’s structure. The bots will play three matches over the latter three days of the Vancouver-based tournament that runs from August 20-25, which this year boasts a top first place prize pool of $10.9 million.

OpenAI is coming fresh from winning a match against a semi-professional team in San Francisco earlier this month. The bots beat a team comprised of former professionals and Twitch streamers that rank in the top 99.95th percentile of players. OpenAI beat the first two rounds of players, but in the third match stumbled to the human team.

Although it seems like a curious area of development, Musk and others have suggested the bots show strong progress in the field. Bill Gates has noted that the Dota 2 bots show teamwork and collaboration, a key skill for future development. In the wake of the San Francisco win, Musk tweeted that developers need to create a neural interface soon “to enable human/AI symbiosis.”

It’s unlikely that one more Dota 2 win will spark a revolution of super-smart machines for now. Vice noted that the “OpenAI Five” team still enjoys a number of benefits over regular players, like the fact these special matches are just limited to 18 characters and the bot team directly interacts with the application programming interface rather than interpreting a screen.

Users interested in watching the championships can tune in to the organized Twitch stream.

More like this
Innovation
8.11.2022 11:00 AM
“Quantum materials” could give the human brain a run for its money, scientists say
By Nathaniel Scharping
Innovation
8.5.2022 11:00 AM
Alexa could diagnose Alzheimer’s and other brain conditions — should it?
By Joanna Thompson
Innovation
8.8.2022 10:00 AM
A wild new plane-train hybrid could whoosh you to your destination — if it can get off the ground
By Molly Glick
Related Tags
Share: