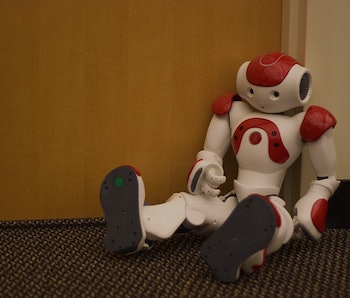 Since Ovid wrote about Pygmalion’s living sculpture, humans have been obsessed with creating non-humans that look human and act human. Now that we’re at the point where we can actually design robots capable of addressing our needs, it’s time to abandon the antiquated impulse to rebuild ourselves.

For one thing, defaulting to humanoid forms is a totally misguided way of approaching robotics. Humans are the most intelligent creatures on the planet (hard to believe, yes), but our bodies are unwieldy. We’re not the fastest, we’re not the strongest (even with regards to our size), and it’s really easy to knock us down on our asses. This is what the robots modeled after us look like attempting basic tasks:

The DARPA Robotics Challenge was meant to get robotics engineers and makers to think more about using robots in disaster scenarios. But wouldn’t that robot have been more capable on rough terrain if it had a third leg or arm. Hell, why not design a car that can drive itself out of dangerous environments?

In other applications too, humanoid robots just don’t make sense. As a killing machine, you should have something on wheels so it could move faster than a walking biped. Or, better yet, make it fly and hunt things down like the Predator drone. If you need a robot to clean your house, a Roomba can take care of it in an hour, and it takes up a fraction of the space a lifelike robot would. And that’s ignoring any instances where we need robots to do heavy lifting — human spines were designed for flexibility, not enduring massive weights.

No, the obsession behind making humanoid robots is more about our psychology and desire to empathize with things more than anything else. Jonathan Hurst, an assistant professor of mechanical engineering at Oregon State University, told The Michigan Engineer in April that he started out designing robotic legs and gaits based on the way birds moved, with knees bent backwards like flamingos. Clearly this was a better design for making robots.

Unfortunately, it wasn’t very compelling to others.

“When you’re applying for grants, funders already have an introduction to your­­ scientific claims,” he says. “And that’s how you keep a research program going. Never again will I build a machine from purely an engineering stance.

Basically, we’re captivated by the idea of the robot as almost human. When something looks human, we ascribe anthropogenic qualities to it, and that helps us bond with it. In a draft of a paper posted in April, Kate Darling from MIT’s Media Lab discusses several different studies where participants interacted with robots that were anthropomorphized in some way — whether it be through a backstory, displays of intelligence, or simply because they look more human. When asked to strike those robots or place them in harm’s way, participants hesitated or resisted. Darling writes that, “we are measuring an empathic hesitation instead of people hesitating simply because of perceived value of the robot.”

That’s not always a desirable trait. For military applications, there are anecdotal accounts of commanders becoming distressed over sending humanoid robots into situations where they will get blown to bits. “One story tells of a robot built to walk on and detonate land mines,” Darling wrote in her paper. “The colonel overseeing the testing exercise ended up ordering it stopped, because the sight of the robot dragging itself along the land mine field was too ‘inhumane.’”

That isn’t to say there is no value in humanoid robots. A human look befits companion robots meant to engage with children or the elderly, or provide care to hospital patients or sick individuals at home. In situations where robots will need to provide some kind of medical care or provide social interaction, a humanoid form can augment the emotional benefits and make the experience much more enjoyable.

But our focus should be on optimizing our robots for efficiency, not familiarity. That’s why there are engineers inspired by the design of other animals, like Kangaroos or snakes, or even spiders and insects. Some robots even just look like cannibalized limbs sticking out of a tank, but they get shit done.

And that should be the overall goal of all robot makers: finding a problem and designing the best robot to solve it. Looks aren’t everything.