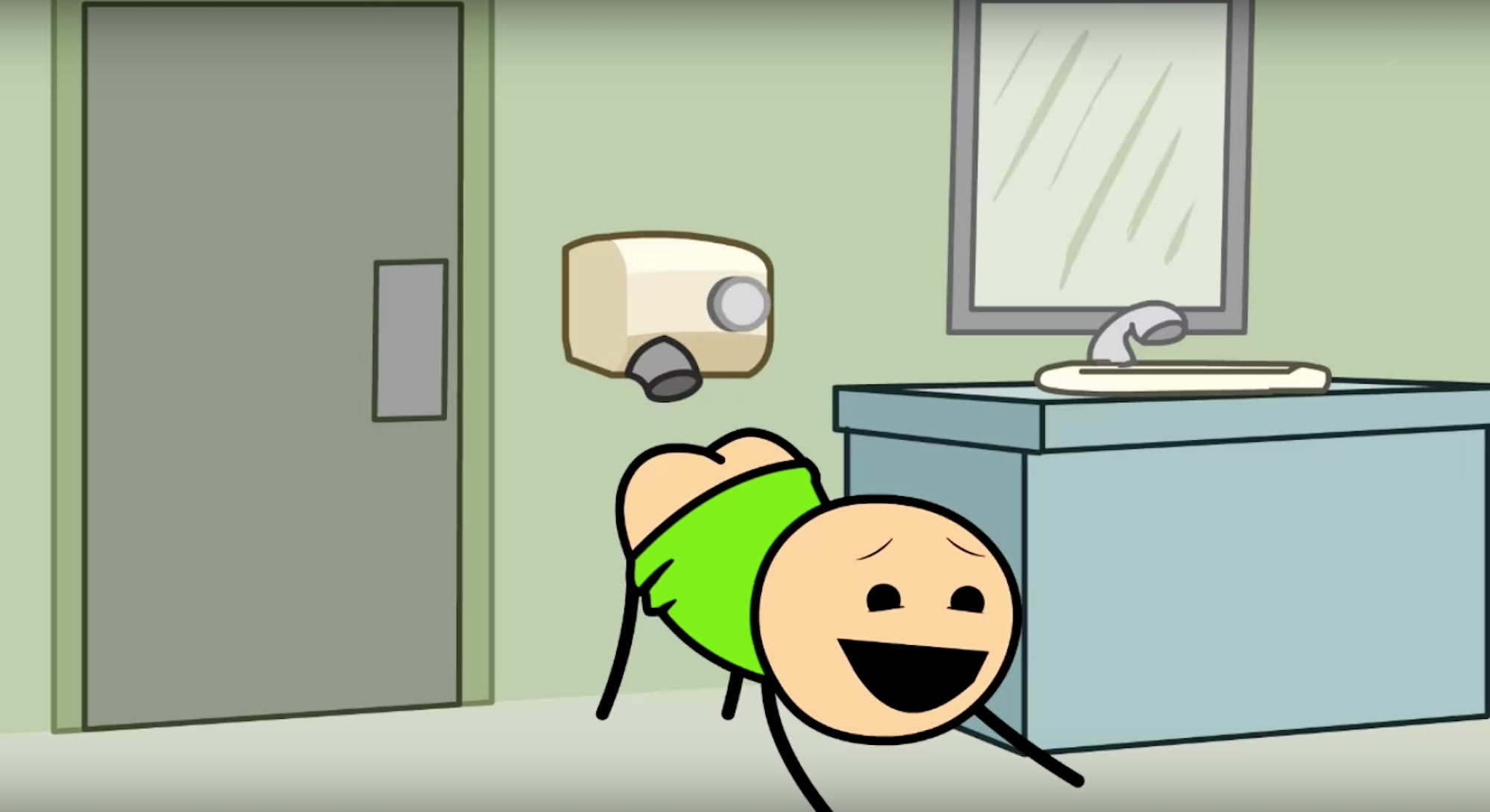 The appeal of Cyanide & Happiness isn’t hard to fathom; violent, foul-mouthed stick figures are funny. But its enduring success well into 2018, with expansion into an array of multimedia like YouTube, tabletop, and online video games, is an anomaly. Emerging in the mid-aughts heyday of webcomics, C&H survived and outlasted the majority of its contemporaries because of a few strategic and unexpectedly prescient decisions made behind the scenes.

Those decisions, co-founder Kris Wilson and producer Adam Nusrallah tell Inverse at RTX 2018, comes from the fact that the creators at Explosm Entertainment were mostly just really chill.

“When we were starting, we had the virtue of, ‘Share it, link it, just keep our signatures,’” recalls Wilson. “We just wanted people to see it, enjoy it, and show it to people who would enjoy it.”

Cyanide & Happiness emerged in 2004, when most (but not all) webcomics were dominated by serialized stories with complex continuities. There were also a lot of video game-centric comics, like PvP, Penny Arcade, Ctrl+Alt+Del, Megatokyo, and the pixelated Diesel Sweeties, all of which cultivated fandoms with defined characters and in-jokes.

That wasn’t Cyanide & Happiness. It was and still is nameless stick figures who murder or cuss out at each other, coming and going in three to six panels. Its signature black humor is broad, too; you don’t need to be gamer to grasp the bleak nuances of the human experience. You just need to know what it’s like to have had a bad day.

“It’s fun because people project themselves into something broad,” says Wilson, who is surprisingly soft-spoken given the outlandish nature of his viral doodles. “This [stick figure] represents a person they can project themselves through and empathize.”

There’s also the silliness of a stick figure blowing up. “It’s silly,” he adds. “It’s easier to catch people off guard with comedy when it’s that broad.”

At its core, Cyanide & Happiness is the twisted minds of Rob DenBleyker, Dave McElfatrick, and Wilson made manifest as a Photoshop file. The three met as teenagers on the pre-YouTube, proto-4chan internet community Newgrounds, where they joined the same subgroup for stick figure animators.

Now adults, they oversee the studio Explosm which employs a full-time staff plus freelancers in the Dallas, Texas area. (Matt Melvin, another illustrator who was also among the original founding group, left Explosm in 2014.)

The founders initially shared their crude stick figure art with each other before setting up a whole website to share them with everyone else. “Rob and Matt had a website called Stick Figure Suicide at the time,” says Wilson. “They were moving away from that and asked me to come on board. We had fun sending [comics] back and forth. It’s like high school, sending notes, but with questionable strangers on the internet.”

The group formed Explosm, a name that came literally out of nowhere, and would work with each other for three years before actually meeting in person.

Adam Nusrallah, a UT Dallas grad who produced the animated short Sticky with 32 of his classmates, joined Explosm much later in 2015 as a production assistant before rising the ranks to become producer on all C&H multimedia. He now plays a critical role in C&H’s expansion into other realms, such as book publishing and video games.

But no one would be playing Joking Hazard, or the upcoming video game Rapture Rejects if the founders made the comic like every other webcomic of its time.

Between an accessible premise (again — stick figures!) and letting fans share their content on social media rather than force traffic to the actual Explosm website, the creators ensured Cyanide & Happiness would evolve while still retaining a deceptively simplistic, almost childish visual aesthetic.

There were also technical and financial reasons why other webcomic artists didn’t like hyperlinking.

“One big reason was the cost of server space and bandwidth,” says Wilson.

Web hosting was expensive, and hyperlinking put a strain on a creators’ limited website bandwidth. Thus, it became “offensive” to a creator to share their work. Because even if credited them, you weren’t giving them the traffic they needed. “If you had an image on your website and it got shared, the bandwidth would exceed. The fact that we allowed hyperlinking helped us.”

Explosm’s embrace of hyperlinking was timely, as Facebook, Twitter, and Tumblr surfaced to allow for funny doodles to get retweeted and reblogged alongside something called “memes.”

“That was a big deal. That is the nature of things now but it wasn’t back then. It’s a social thing.”

Wilson also believes the identity of C&H was different than most webcomics. In broad strokes, the majority of other creators were carefully building original IP while “we were doing gags.”

“I can understand why people would [block hyperlinking],” he says. “We were doing jokes. It’s different than a piece of art people are freebooting.”

“There’s a vulnerability to being an artist,” Nusrallah says. “Even if they want to, everybody goes through getting over that hurdle of sharing it.”

Webcomics aren’t dead, but the culture is past its prime. Despite that, Cyanide & Happiness has thrived, its creators adapting and expanding to new mediums at a careful pace. When a big opportunity in Hollywood came around in 2013, Explosm turned it down, and chose to go to Kickstarter to fund what would become the mega popular Cyanide & Happiness animated series on the 8.5 million subscriber-strong Explosm Entertainment channel on YouTube.

“We hit a tier where we’ll do a short every week without thinking about what that entailed,” Nusrallah remembers. That was “five or six” years ago, “and we haven’t missed a single one since.”

YouTube’s recent demonetization of offensive content hit Explosm hard, even though Cyanide & Happiness isn’t obscenely offensive. (In one short from 2014, a racist caricature named “Speed Racist” dies a slow, painful death. Nothing wrong there.) In May, Explosm opened up a Patreon as a new avenue of revenue. The fans blamed YouTube than the beloved creators. (Most of them, anyway.)

Not bad for a couple of teenagers on the internet.

“We’d love to see where it can go,” Wilson says about the future of Cyanide & Happiness. “I know we have our dreams sitting in the theater watching a C&H movie because why not? We were talking about a Broadway play. I don’t know how it would work out. But it would be funny.”