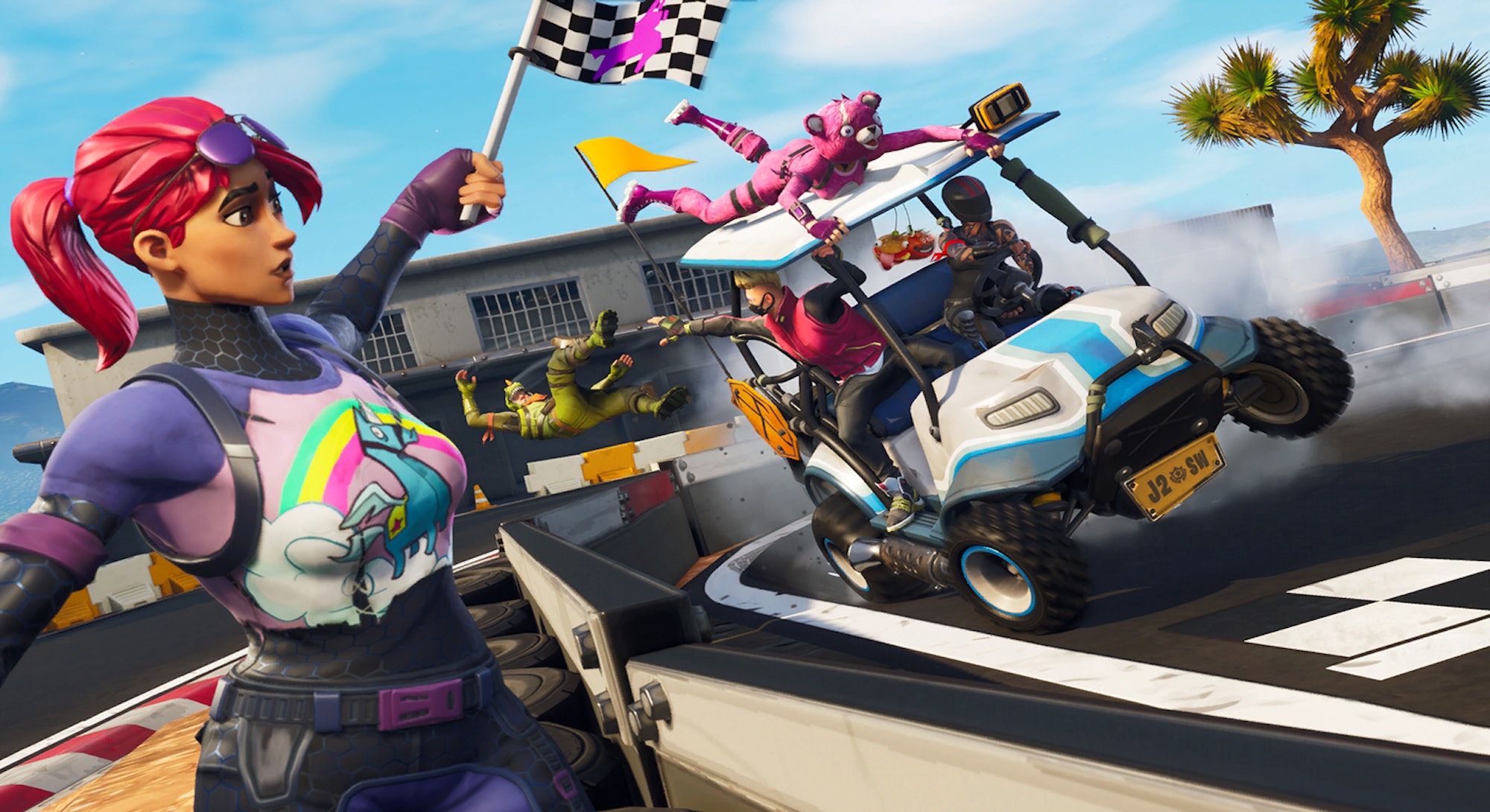 For most of the summer, iD Tech Camps commandeer the entire third floor of New York University’s Kimmel Center in Manhattan to teach kids STEM-based courses that range from simple robots to machine learning and even designing a video game like Fortnite: Battle Royale. Game design has long been a major tenet in iD Tech Camps curriculum, but it wasn’t until 2018 that a one-week course called “Fortnite Camp and Unreal Engine Level Design” was added. Somewhere around 2,000 students registered for the class, filling up almost every open spot completely with another 4,000 working in the same program to make different games.

I had the opportunity to visit iD Tech’s summer camp in New York City earlier this summer on behalf of Inverse, where I saw kids ages 6 to 18 learning all sorts of technical skills ranging from video production to designing and 3D-printing all manner of objects. Some students even built their own Raspberry Pi “pi-top” laptops to keep at the end of the program.

The class on Fortnite however, leverages the overwhelming popularity of the game to get students interested in game design. Considering that that the video game industry will make an estimated $138 million in revenue by the end of 2018, learning these skills could very well lead to a lucrative career one day. So even when the kids play Fortnite in between classes, you might as well consider it research.

Here’s what some students at iD Tech Camps made four years ago in Unreal Engine 4:

When I showed up to iD Tech Camps in July, I came with minimal technical experience. After a tour of the many different classes, I got a brief orientation from the Fortnite course instructor, Zachary Rodriguez. I was even set up with my very own workstation.

iD Tech utilizes an online portal that has an interactive course roadmap — students progress through a series of modules and exercises with step-by-step instructions. Visual aids like photos and videos help them understand how to accomplish each task. Initial steps in this program explain what Fortnite is and how it works. There’s a brief overview of how Epic Games built Fortnite using Unreal Engine.

In addition to developing Fortnite and the Gears of War franchise, Epic Games also created the Unreal Engine, currently in its fourth iteration. The engine has been free for anyone to use since 2015 — including students and complete amateurs. But plenty of large video game developers also still use it.

When Kingdom Hearts III finally comes out in early 2019, that’ll be Unreal Engine 4, and so will the upcoming Final Fantasy VII remake. The long list of Unreal games includes PUBG, Octopath Traveler, and the Gears of War franchise, just to name a few. And if iD Tech has anything to say about it, one of their students could make the next big Unreal game.

The first initial steps of iD Tech’s program have the creator upload various assets and pre-load a specially designed island. There’s a mountain, a few simple structures, and plenty of open areas, all set to run a basic battle royale experience co-designed by Epic Games. Instructor Rodriguez said that most of the class is spent populating that player space with whatever assets students might want. There are tons of things to choose from in the Unreal Engine, mostly for free.

The first big major step in the curriculum has students install and build a castle by downloading an asset pack and uploading the structure into their game.

One of the very first things I did with my still-untitled battle royale game was to delete the floor and hit play, just to see what might happen. I am an idiot.

My character spawned and fell through a bunch of water, then continued falling beyond the programmable area into a seemingly infinite white abyss. My character, and perspective in editing mode, was trapped several miles into that abyss. I had to hold down on the arrow key. Just like when I was in school, I pursued the slow, incorrect solution because I was too embarrassed to ask for help.

But to be on that side of the video game experience is a useful exercise to help any gamer understand that every video game environment works in this fashion. Static meshes — permanent objects that never move — and other boundaries essentially box players into a confined space. Yet, every viewable object has to be created and inserted into the area, even if players can’t interact with it.

Once I got the hang of how to download new assets to my account and upload them to the environment, I quickly placed a giant sphere, a mostly-buried statue, and several piles of rocks on the ground around me. If this work sounds mundane, that’s because it is, but it’s also a hugely important part of the game-making process. These textures add character to the world.

It wasn’t until then that I realized the giant, blank box nearby full of darkness was a simple house with stairs inside and no lights. I was able to place lights in much the same way.

I discovered a creepy-looking monument that looked vaguely futuristic. That’s when I decided that my battle royale was a dystopia, akin to Horizon Zero Dawn, in which advanced technology plunged the world back into the Stone Age. The only source of enjoyment in such a world of scarce resources would be a battle royale to the death for glory and honor.

I imagine that many of my fellow students had a similar experience, a turning point in their creativity after they discovered something they liked.

Almost all of the students in the class were huge Fortnite fans. During their mid-morning break, most of them spent it playing Fortnite on the same Epic Games app they use to run Unreal Engine. They’d chatter about strategy and other best-practices, gossiping about a rumor they saw on YouTube that animals might be might be coming to the game. (Animals still haven’t been introduced, unless you count those dinosaur statues.)

That same student, a minor who I’ll call Keith to conceal his identity, was interested in integrating animals into his own game and worked with the instructor to design them. Yet another wanted to expand the game’s limited initial arsenal, a process that mostly meant copying and altering the details on the machine gun that comes pre-loaded.

The student working next to me, Grace, was building what the instructor called a “massive water temple.” She had obliterated the entire preset island and replaced it with a square-shaped stone pathway encircling what was indeed a massive stone temple with magical waterfalls running off of each side into the endless water below.

“I just wanted to build something that looked cool,” she said to me when I asked about it. To Grace, gameplay mechanics came last. In this way, the Fortnite class — and iD Tech in general — cater to individual student abilities and interests. Instructor Rodriguez explained to me that the trick with this “water temple,” as he called it, was to add a mesh that could simulate the flow of water in the waterfall.

Ricky Bennett, Director of Innovation and Partnerships at iD Tech Camps, explained to Inverse how a partnership with Epic Games came together to help make the Fortnite classes a reality.

“On the enterprise end of things at Epic Games, they’re getting into so many other topics other than video games through the use of Unreal Engine,” Bennett said. “Architecture, aeronautics, real estate construction, media film, marketing, auto engineering — all of these industries are being revolutionized by Unreal Engine. There’s so much more than just being a video game maker that you can do with this engine.”

This one Fortnite class can help 2,000 or so kids gain an interest in broader engineering skills that could one day apply to a number of different industries.

When the course is finished, students walk away with their projects saved on a zip drive so they can continue their work at home. And because Unreal Engine 4 is completely free, students can install the program on just about any computer they have access to. For each of them, this is an opportunity to continue building upon the foundation skills learned through iD Tech Camps.

“We’re gonna play some Fortnite and have fun in the course,” Bennett said.

But hopefully not too much fun.

“Our job isn’t to create the next Fortnite star,” he added, even though Bennett does admit that the course includes time spent playing the game and tips on how to stream gameplay. “Our job is to leverage enthusiasm for the game as a way to get a student on a pathway to a career one day. We want to provide positive exposure to technology that’ll help fill those 2 million unfilled STEM jobs in the US.”

For any iD Tech Camp students that want to use their experience to pursue a career in game design, it sure seems like a strong possibility.