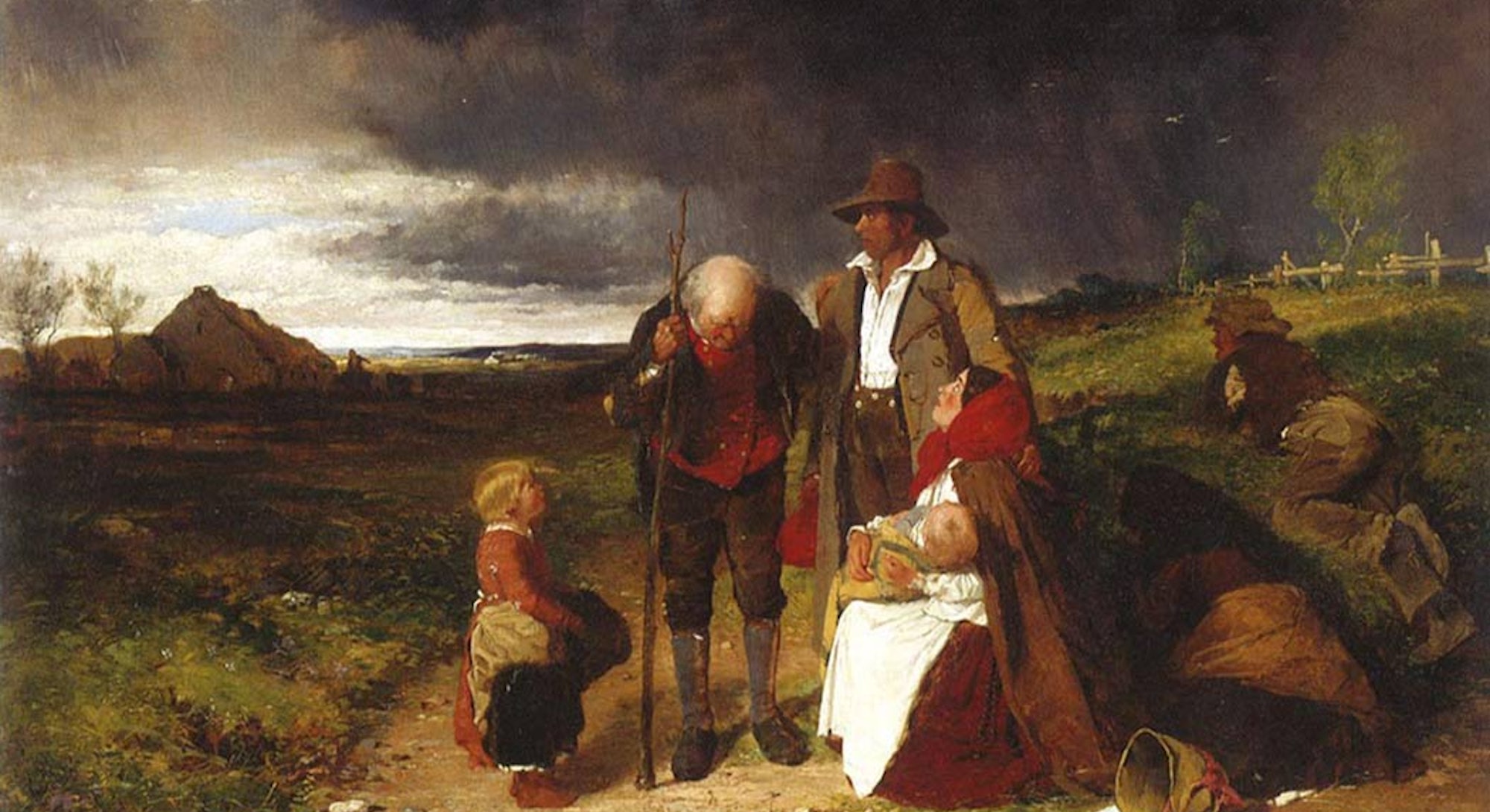 On July 15, comedian Josh Androsky tweeted a video of a Proud Boy, a member of the alt-right men’s group started by Vice co-founder Gavin McInnes, claiming that the Irish were enslaved.

“Irish people were slaves just like the fucking black people,” said the young man in a MAGA hat.

The statement, while probably jarring to most, is derived from a common alt-right myth and is yet another instance of fringe conservatives molding history into white supremacist propaganda. What makes this myth particular interesting is its own peculiar history: It was one of the first right-wing memes to be spread on the early internet.

One of the Oldest Memes on the Internet

Liam Hogan is a historian and researcher who has spent the past five years studying and debunking the Irish slavery myth. According to him, one of the seminal figures propagating the theory is Michael A. Hoffman II, who first spread his ideas on internet newsgroups in the 1990s. Hoffman’s perhaps most well known for his 1993 book They Were White and They Were Slaves: The Untold History of the Enslavement of Whites in Early America, a self-published title that was harshly criticized by academics, and like many alt-right mythologies, is still available on Amazon today.

That book has gone on to be the cornerstone of the Irish slavery myth, which according to Hogan, was ultimately concocted for nefarious purposes.

“The far-right embrace of the false equivalence inherent in the ‘Irish were slaves, too’ meme is not an attempt to assuage guilt,” Hogan wrote in an email to Inverse. “It is instead a blatant bid to support pre-existing anti-black racism.”

The myth was a common sight on white supremacist websites and message boards in the early 2000s, but Hogan noticed a sharp uptick in searches for “Irish slaves” between 2014 and 2016. It got so bad that 82 Irish researchers and writers (including Hogan) wrote an open letter excoriating the myth and urging publications to stop quoting conspiracy theorists.

Were the Irish Actually Slaves?

The Irish have suffered many injustices in America from nativist resentment, job discrimination, and religious bigotry. But they were never enslaved.

For one, indentured servitude was conditional and temporary. Irish servants were released after their contracts were up (typically seven years).

African Americans, however, were literally classified as a slave race. In early American history, children of slaves could be born free if they had a white parent, but these laws were slowly stripped away so that anyone with African heritage would be classified as black and therefore a slave.

Moreover, the conditions in which they worked were completely different. African slaves were subjected to inhuman horrors that would have been unthinkable to commit against an Irish servant. Whippings, brandings, mutilation, and rape were common.

American slavery was shockingly cruel even by historical standards. Though the treatment of slaves varied widely throughout the ancient world, most of them were still entitled to some basic rights and many slaves were even highly educated. The Greek philosopher Epictetus, for example, was born as a slave and trained to be a teacher.

Why Is the Irish Slavery Myth So Persistent?

If the myth of Irish slavery is so demonstrably false, then why does it continue to be an alt-right talking point? As Hogan mentioned, it’s used as a cudgel for anti-black racism, but it also upholds the white supremacist narrative of fighting against the world.

“The far-right also promote the ‘white slavery’ or ‘Irish slavery’ meme because victimhood is the propagandic engine room of ethno-nationalism,” Hogan told Inverse in an email. “White nationalism is fundamentally rooted in victimhood, whereby the dominant group in society takes the position of ‘the oppressed’ to justify violence against the ‘other.’”

The glaring dissonance of white supremacist rhetoric is the simultaneous belief that white people are a superior race despite claiming constant victimhood in being outwitted by supposedly inferior forces such as the liberal media and its Jewish globalist puppet masters.

Altering history and referring to the Irish as slaves is an attempt to solve that discrepancy. For white supremacists, if the Irish managed to rise above discrimination through hard work and ingenuity, then it must mean the other races are lazy or unworthy. It also means that white supremacists will ultimately prevail over their foes.

In truth, the Irish escaped systematic inequality through neither work nor drive — that’s an impossible feat for any group of people. The target was removed from their backs because they began to be understood as white, according to scholar Noel Ignatiev. In 1863, Irish rioters targeted hundreds of black workers during the New York City draft riots, furious over the prospect of fighting in a war to free black slaves. By actively working against abolition movements and aligning themselves with the nativists who originally opposed them, Ignatiev says the Irish were eventually inducted into whiteness.

Law professor David Bernstein also pointed out that, as far as the law was concerned, the Irish were always considered white. During segregation, Irish children attended whites-only schools and none of them were subject to Jim Crow laws. African Americans, Native Americans, and Chinese Americans could not testify against white citizens in court, but Irish Americans could.

Unfortunately, facts and contexts aren’t held in high regard within the alt-right. On a grander scale, White Americans as a whole have been resistant to the idea that systematic racism is an enduring feature in American government because of a phenomenon that sociologist Robin DiAngelo has dubbed white fragility. The combination of far-right groups to falsify history and the refusal to acknowledge institutionalized discrimination means that the Irish slavery myth isn’t going away any time soon.

Ultimately, the propagation of the Irish slavery myth can be linked backed to the perennial white fear of changing demographics. It’s an attempt to counteract the well-documented benefits that White Americans enjoy by claiming there was a time when whites supposedly suffered more than minorities. This notion of white victimhood seems to be a pervasive belief among most White Americans.

55 percent of White Americans believe there is discrimination against white people in America today, according to a poll jointly conducted by the Robert Wood Johnson Foundation and the Harvard T.H. Chan School of Public Health. Their beliefs are unfounded, yet it is the chief reason why the majority of white people across the board — from income level to gender — voted for Trump.

Racist anxiety has even altered the moral purity tests that white evangelicals once demanded from their chosen political candidates. In 2011, only 30 percent of white evangelicals were tolerant of elected officials who behaved unethically in their personal lives, according to a poll from the Public Religion Research Institute. In 2016, the same year Trump got elected, the number of white evangelicals expressing sympathy for immoral politicians doubled to a whopping 72 percent.

Whiteness has been a historical shield that has protected various groups from cultural and political bigotry, one that many White Americans believe will be forfeited if the country becomes less white. But unfortunately, a more diverse country doesn’t necessarily mean a more progressive one.

John Judis, a journalist who claimed that an increasingly diverse America would mean a less racist America, recanted his thesis after Donald Trump’s election. Judis and many other pundits believed that the rising numbers of interracial marriages and mixed-race Americans would lead to a more progressive country.

But in doing so, they vastly underesimated the flexibility of white supremacy. White people continue to be a majority power in the United States because of changing attitudes over who gets to be white and who doesn’t. The one-drop rule applied to Americans with African ancestry and the Irish induction into whiteness set these historical precedents hundreds of years ago.

As Judis pointed out, this has already been happening with some Asian Americans and Latino Americans. More than a quarter of both groups are in interracial marriages, the vast majority of which are Asian-White and Latino-White. Although the US census lists the children of these unions as Asian American and Latino American, more than 50 percent of biracial people from both groups identified as white. If this trend continues, then it’s unlikely that the United States will become a minority-majority country in the near future.

The Irish slavery myth is cribbing from an old playbook established by white supremacists years ago. The alt-right is simply the latest to do it by shitposting memes, gaming Google results, and leveraging social media.

“These are the trademarks of Disinformation Age racism, the blanket denial of the existence of racism allied with feigned victimhood and the absolute obliteration of history,” Hogan said.