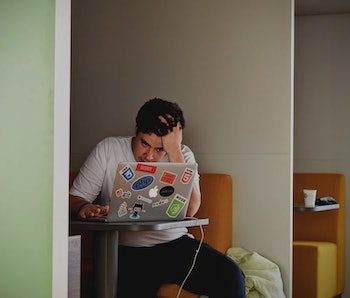 Insanity has been defined as doing the same thing over and over again and expecting different results. What people do when they encounter a problem is not that different: They continue to try to solve the issue, whether it’s an attempt to land a rocket ship or to cure a disease. That we don’t give up when we encounter failure may seem like a slightly insane flaw in human evolution, but the neuroscientists behind a new study explain that there’s an important reason we persist through uncertainty.

The authors of the new study, published in the July issue of Neuron, admit that human perseverance in unpredictable scenarios seems irrational. “According to standard learning models, you should not repeat any behavior if its outcome is negative. However, this is not what we do,” study co-author and Yale University neuroscientist Daeyeol Lee, Ph.D., explains to Inverse. “Often, when you have a goal, you persist even after repeated failures. This is one example where it might be beneficial to slow down learning or reduce the rate of learning.”

No matter how powerful it is, even the brain needs a break from learning. Previous studies have shown that if the brain was learning all the time, we would give up when we experience failure — in other words, it would “learn” from just a few failed attempts that trying is futile. Since our dogged sense of perseverance shows that’s not true, Lee and his team tried to find out what happens in the brain when it actually does decide to learn, carrying out studies in rhesus monkeys, who are just as stubborn as we are when it comes to solving problems.

The rhesus monkeys were trained to do learning tasks, in which one action would lead to a reward and the other would not. Manipulating the reward possibilities, the researchers reasoned, would make it difficult for the monkeys to figure out how to make the right decision, thus allowing them to observe when the brain stops “learning” and gives up.

All that time, the team were scanning the brains of the monkeys to measure activity. Those scans later revealed that when the monkeys couldn’t pick up a pattern that worked — that is, when reward probability was volatile — brain activity in the prefrontal cortex picked up. When the rewards were predictable, activity in that area decreased, and the animals stopped learning.

“The real novel part of our work is the findings related to the neural activity in the prefrontal cortex,” explains Lee. “Some of these results were unexpected because previous human neuroimaging studies have shown that volatility and uncertainty had the largest effect in the anterior cingulate cortex. We found the most interesting effect in the dorsolateral prefrontal cortex, a region associated with working memory and strategic thinking.”

This result demonstrates that there’s a fundamental difference in brain activity when animals are learning or not, which is consistent with established research showing that the learning process stems from the same cognitive function that underlies memory and decision making. Now we not only know that it’s detrimental to be learning all the time but also that brain activity looks different when it takes a break — allowing us the necessary pause to keep on trying.

More like this
Mind and Body
6.29.2022 6:30 PM
How music makes you feel may depend less on your brain than scientists once thought — study
By Allison Parshall
Science
6.22.2022 10:00 AM
Look: This black hole illusion reveals an innate evolutionary instinct
By Jennifer Walter
Mind and Body
7.4.2022 10:30 AM
Do you need 8 glasses of water a day? Hydration scientists demystify the number
By Katie MacBride
Related Tags
Share: