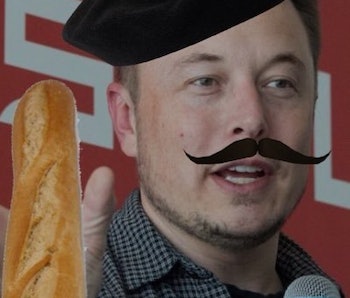 Twitter has come under fire in recent months from everyone from Seth Rogen to journalists for refusing to intervene in the spreading of misinformation and propaganda by alt-Right accounts on one side, and “shadow banning” certain political views on the other. But the platform has come to the rescue of the internet’s friendly, neighborhood billionaire, Elon Musk.

Twitter users began discovering over the weekend that simply using Musk’s name in your public name results in a locked account.

Why would one of the most powerful social media corporations crack down on one seemingly insignificant issue afflicting one very powerful person?

The official reasoning is that Twitter wants to combat spam and malicious activity, and in the case of Musk, there are bots who use his name and reply to his tweets trying to scam followers into buying fake cryptocurrency. Which, to be fair, has been observed by Musk fans and detractors alike.

But there are bots everywhere on Twitter, not just in Musk’s replies. Another possibility is that Twitter wanted to address the hilarious parody account plaguing Musk. It’s not too much of a logical leap to wonder if this is really about Italian Elon Musk and its many copycats.

If you haven’t run across fake Elon Musks on your timeline, you may not recognize the, ahem, severity, of Musk’s parody problem.

The Musk meme began with Alex Arbuckle, a formerly verified Twitter user who renamed his account “Italian Elon Musk” and tweeted some pretty humorous gems before getting stripped of his blue checkmark.

The following are a few tweets Musk may have seen and taken offense with:

Of course, it was probably more amusing for most when Arbuckle’s profile was a badly photoshopped picture of Musk with some stereotypical Italian objects, and his name was literally “Italian Elon Musk,” but you get the point.

Arbuckle returned to his regularly scheduled comedy posts, but another brave warrior picked up the torch with French Élon Musque, which seemingly tricks Twitter’s Musk name recognition system. The teen behind the parody account tweeted voraciously for a bit, but is now losing steam.

The problem with Twitter’s move to ban Musk impersonators is two-fold: one, it’s a seemingly insignificant problem whose solution requires questionable limitations on speech, and two, it’s going to be impossible to continually execute. The parody accounts that have survived all have workarounds, like adding extra letters and accent marks.

Fortunately, internet historians have the trusty screenshot to preserve this online moment of Musk roasting until our hard drives turn to dust and the cloud dissipates.