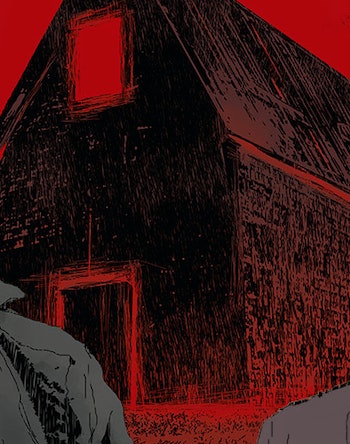 In the rural town of Gideon Falls, there stands a black barn house with blood red light emanating from inside. No one knows anything about “The Black Barn,” yet its dark, alluring presence attracts and terrifies all who dare enter its vicinity.

Welcome to Gideon Falls, the Eisner-nominated horror series from Image Comics. Written by Jeff Lemire and illustrated by Andrea Sorrentino, the comic follows a priest assigned to the parish community of Gideon Falls, a town plagued by a rash of mysterious deaths. At the same time, an anxious city dweller digs through garbage, seeking answers to the Black Barn that’s haunted him his entire life.

After debuting this past March to critical acclaim, production studio Hivemind secured Gideon Falls to become a live-action TV series. Meanwhile, the finale to the comic series’ first arc, “The Black Barn,” will be told in issue #6 on August 15.

In an interview with Inverse, Lemire unpacks the characters of his hit series and the unique, bleak world they inhabit.

“The external horrors of The Barn are not the only thing tormenting the characters,” Lemire says. “They are each struggling with their own pasts and their own set of mistakes, and The Black Barn seems to magnify these things for each of them.”

A small town desperate for help, the inhabitants get more than they bargained for in Father Wilfred, or “Fred,” an “untethered” priest with a drinking problem who arrives into the town as an outsider.

A compelling twist to Gideon Falls is that it’s not just a rural horror story, it’s also an urban one. Parallel to Father Fred’s story is a man named Norton, who lives far away in a bustling city but is still troubled by the Black Barn of Gideon Falls.

“The city and rural polarity is working in multiple ways,” says Lemire. “First, in terms of pure aesthetics, the book contrasts the wide-open spaces and natural world of the small town with the dense and dirty world the big city.”

This contrast echoes with Wilfred and Norton. “Norton uses the city as a way of being anonymous, of blending into the shadows and back alleys and isolating himself.” Father Wilfred, meanwhile, cannot be invisible in a small town. “He is now part of a community and can no longer hide himself away.”

One of the two protagonists of Gideon Falls, Norton is an “anxiety-ridden” city dweller who collects garbage off the streets.

“Haunted by the Black Barn for as long as he can remember, he believes he is connected to it somehow. This faith is one of the few things that keeps him going in life, as he struggles with amnesia and depression.”

Father Wilfred has “a very troubled past” that he is “still recovering from.”

“Having been moved from town to town for years now, he is finally given a parish to settle into, and it just happens to be Gideon Falls,” Lemire explains. “As he investigates the Barn and the town’s past, this becomes Fred’s final chance to not only save himself but also save the town of Gideon Falls.”

A “headstrong, determined woman with a difficult past,” Lemire teases that readers/viewers will see what makes her tick as Gideon Falls progresses. “Clara starts off as Father Fred’s main foil in town, but the two will need to come to terms and work together if they hope to defeat the Black Barn.”

Doc Sutton and The Ploughmen

Every town has their neighborhood kook obsessed with conspiracy theories. In Gideon Falls, that’s Doc Sutton. But instead of the melting point of steel beams or the Illuminati, Doc’s greatest obsession is the Black Barn. “He is able to fill Father Fred in on the history of the town,” Lemire says.

Every town has their neighborhood kook obsessed with conspiracy theories. In Gideon Falls, that’s Doc Sutton. But instead of the melting point of steel beams or the Illuminati, Doc’s greatest obsession is the Black Barn. “He is able to fill Father Fred in on the history of the town.”

An ordinary school bus driver. “There is absolutely nothing else out of the ordinary about this man…” Lemire eerily tells Inverse. Hmm.

“It is the looming and all-encompassing presence that connects our disparate stories and characters.”

When I ask what the Barn represents, Lemire replies, “Nice try.”

“A man with a great smile and one hell of a home to live in,” Lemire says.

Gideon Falls #6 will be released August 15.