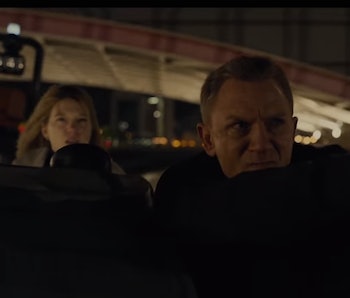 This film has had a slow rollout since the movie got its name and Bond aficionados started inventing conspiracies with the dogmatic geekdom of X-Files fans. Here’s more fuel for the furnace. Christoph Waltz’ character finally steps into the light, hinting at a connective tissue between the Craig’s run when he calls himself the “architect” of all Bond’s pain. Also getting a proper introduction is Dave Bautista’s Mr. Hinx, with a few shots of the burly henchmen breaking heads Oddjob-style. It’s conventional wisdom the villains make the Bond. These two are promising. I’m optimistic.

In Bond’s corner we have a returning M, Moneypenny, and Ben Wishaw’s Q, who steals the trailer for gearheads when he unveils that aforementioned Aston Martin. The luxury car was designed and built specifically for this film and begs a Top Gear reunion. I just really want that car you guys.