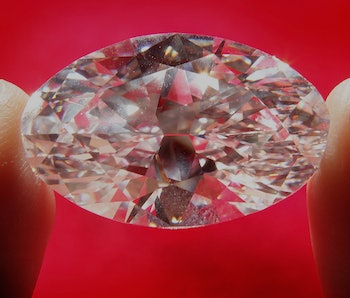 Synthetic gems are now so like natural stones, jewelers are inventing machines to distinguish between them. The best thing about this is that it finally yanks the last facade of value off the natural diamond trade, leaving nothing but a vulgar flea market barter between vanity and misery.

At least a quarter of all diamonds in jewelry store cases are blood diamonds. The high amount of blood diamonds is occurring partly because they look exactly the same as any other diamonds and partly because buyers simply don’t care enough to weed through every stone’s provenance, despite children being used as slave labor to claw them out of South African mines. Sparkles make people dumb. Kanye West even wrote a song about the Schindler’s List outtakes supplying his bling, and he still announced he wanted to design a diamond ring for his 16-month-old.

Consumers still think of synthetic diamonds as “cheap and fake,” as Popular Science put it, but you put a lie to that thinking when you slide one under a jeweler’s lens. It could be a laser inscription from the company that grew the stone, or that the type is too rare to likely be on the market, or the shape of their formation. Or it could be the color of the stone’s fluorescence - blue in natural and orange in lab grown. And that “cheap” thing? Yeah, they cost 40 percent less, despite being totally awesome in their own right. Here’s how PopSci describes the process:

They’re formed differently. While natural diamonds form under intense heat and pressure under the earth’s surface, synthetic diamonds are obviously grown in a lab. At IIa Technologies, each diamond begins with a “seed”—a previously grown or natural diamond that’s about the thickness of a fingernail. This seed is placed in a vacuum chamber where microwave rays, methane and hydrogen gasses rain down to build layers of carbon bonds that form a diamond. “At correct conditions, correct temperature, the crystal growth actually starts and the diamond just starts growing,” said physicist and IIa technique inventor Devi Shanker Misra. These differences show distinctive growth patterns that you can detect with a machine.