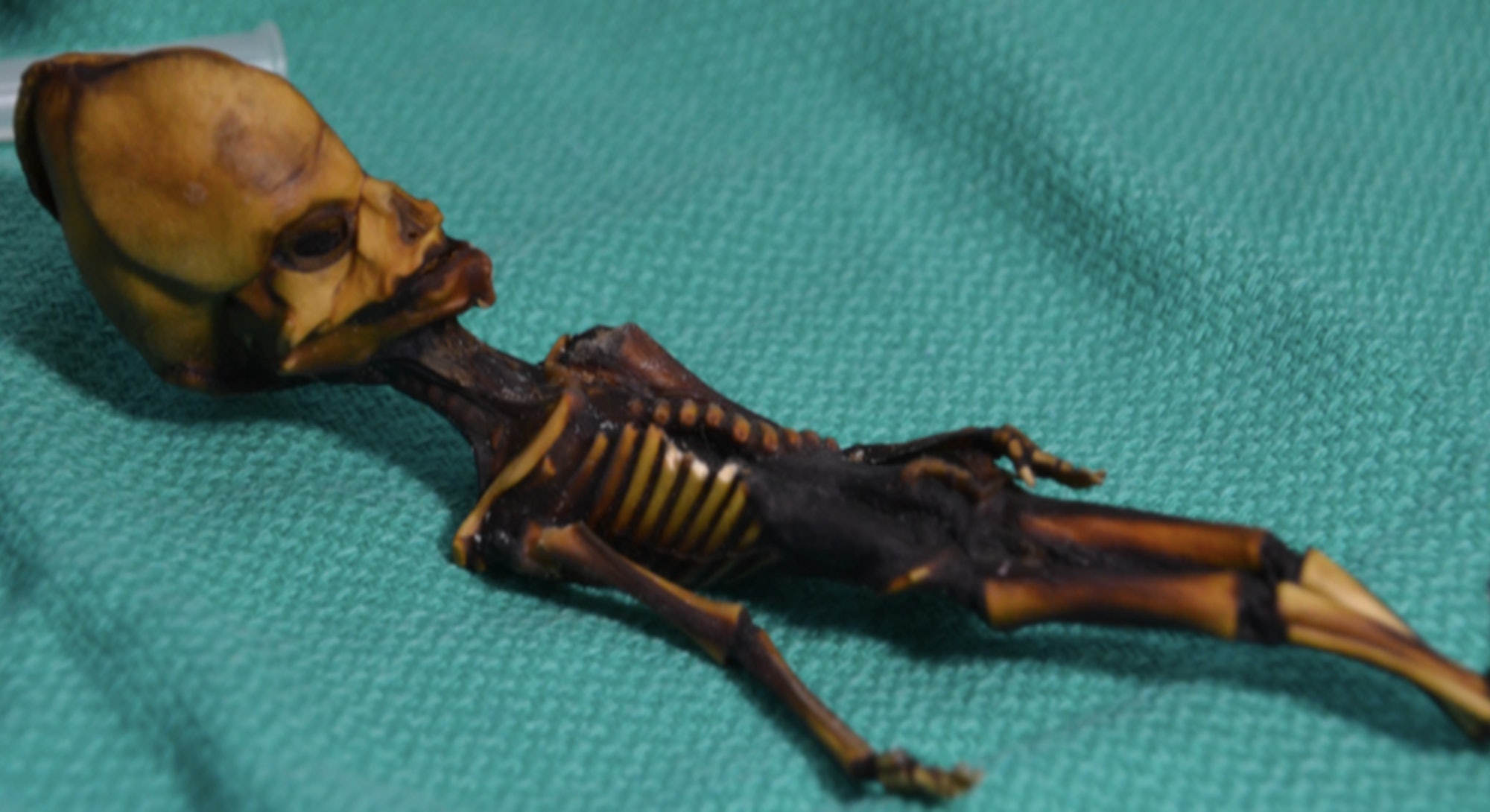 Like many ancient artifacts, the tiny, bizarrely shaped Atacama skeleton was sold to a private collector soon after its 2003 discovery in Chile’s Atacama desert. Six inches long with an elongated head and missing ribs, ‘Ata’ certainly doesn’t exactly look human, but in 2013 scientists confirmed that the skeleton belonged to a human infant girl. In March, a study published in Genome Research acknowledged her humanity but pointed out genetic mutations that made her seem alien, sparking a heated controversy over the study’s apparent breach of scientific ethics and lack of respect of humankind.

In a critical evaluation of the Genome Research analysis, a team of researchers, publishing in the International Journal of Paleopathology on Wednesday, argued that Ata was clearly a human preterm fetus, and as such the battery of genetic tests performed on her — without permission from the Chilean government — and the resulting perpetuation of the “alien” narrative were gross breaches of scientific ethics and human rights. If a skeleton is clearly human, they argue, scientists have no right to poke and prod at it as if it were not.

“Most people have never seen a very young human fetus and have never seen a non-adult mummy, so I understand how Ata could look ‘alien,’” co-author and bio-archeologist Kristina Killgrove, Ph.D. tells Inverse. “But to those of us trained in developmental human biology, it is clearly a mummified fetus. To suggest that a fetus looks other-worldly may seem harmless, but in this case it took away Ata’s humanity, leading to major ethical oversights.”

“It was clearly nonsense from the get-go, but the public loves this crap.”

In the Genome Research analysis, researchers from the University of California, San Francisco and Stanford University concluded that Ata carried 64 genetic mutations that affected her bone formation and development. They wrote that Ata was either stillborn or died immediately after birth, and her ten pairs of ribs (adult humans normally have 12) and elongated skull were likely an effect of her mutations.

Killgrove and her team were shocked when the paper was published. Despite the fact that Ata was confirmed to be human, the scientists behind that study performed tests on the remains without any ethics permits, which are required for work on all skeletons, modern or ancient. When asked by the New York Times in March why his team didn’t ask their universities for permission to examine the remains, Stanford immunologist Gary Nolan, Ph.D., a co-author on the March study and collaborator on the study proving Ata was human, said it was because “they suspected that it was possible the remains belonged to a nonhuman primate.” The information on Ata they had going in, he maintained, didn’t qualify her as a human subject.

Stony Brook School of Medicine distinguished teaching professor emeritus William Jungers, Ph.D., a co-author on the new paper and an expert in the skeletal biology of living and extinct humans, doesn’t see how that argument can stand. Since 2013, he’s maintained that Ata is human and says it’s unclear why anyone would think otherwise.

“It is a dehydrated fetus of a human being whose mother’s pregnancy terminated early for unknown reasons,” Jungers tells Inverse. “It was hyped as an alien for commercial purposes. It was clearly nonsense from the get-go, but the public loves this crap.”

“It is a dehydrated fetus of a human being whose mother’s pregnancy terminated early for unknown reasons.”

For Junger, Killgrove, and the rest of their interdisciplinary team, discovering that the Genome Research paper was published without any permits raised red flags about the study as a whole. So, they pored over the data, ultimately finding “no evidence for any of the skeletal anomalies claimed by the authors.”

The skeleton appears typical for a baby that died at a gestational age of 15 weeks, they argue in the new paper, and her elongated cranium is phenotypically normal for a preterm fetus that has been delivered. While there is little information on the formation of ribs in utero, it’s thought that the lower ribs don’t form until the twelfth week of intrauterine life — so it’s very possible that Ata’s last two pairs of ribs just weren’t articulated yet.

Because Ata’s physical form is clearly human, the team argues, there was no scientific reason to analyze her genome. Though the analysis did turn up several mutations, they are described as “potentially coincidental,” the authors write, noting that none of them are strongly associated with skeletal dysplasia that could affect a fetus of Ata’s age.

The key mistake the Stanford and UCSF teams made, says Killgrove, was assuming that Ata had abnormalities in the first place. They trusted doctors who specialize in pediatric abnormalities — not anthropologists who specialize in evaluating remains that have been changed by the burial process, like Jungers. When he looked at the skeletal interpretations in Genomic Research, he saw them as “bizarre and mostly fanciful.”

“The embryology and skeletal biology in the paper were shockingly bad,” he continues. “The breach of best practices, common sense, and ethics that the journal allowed in the Ata article added an increased urgency to correct the scientific record.”

Since the Genomic Research paper was released, scientists have questioned the legality and validity of the research: Some say that Ata’s exhuming violated Chile’s laws, and the Chilean Society for Biological Anthropology implied that the same study wouldn’t have been conducted if it was the “corpse of someone’s miscarried baby in Europe or America.” Other scientists have blamed the momentum behind the research on the “bone rush,” referring to the immense pressure to make new genetic discoveries, and fast.

A demand for outcomes should not undermine the reality that Ata is a relic of a not-so distant tragedy for a mother living in the Chilean desert. Nolan believes that Ata was buried only 55 years ago. But her death, followed by — her highly publicized exhumation, analyzation, and subsequent press tour — turned her into a spectacle.

“We hope that that the public has learned a bit about what the develop of human babies looks like and that other researchers have learned to not jump into a situation where the ethical waters are muddy,” Killgrove says.

“People who want to help prove or debunk Bigfoot, aliens, and other fantastical creatures should be aware that they are potentially opening themselves up to ethical and legal problems.”