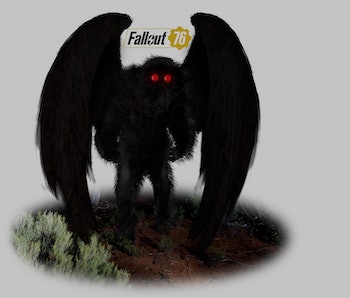 Fallout is not really a series about America, but rather how America saw itself during the relentless optimism of the 1950s. The first two Fallout games touched upon the uniquely American ways the country built its national mythology, but in Fallout 76, the series is shrinking that observation to a smaller scale.

The new game takes place in the beautiful rolling hills and smoky mountains of West Virginia, but the state is also rich with mysterious local legends and quirky tall tales. Every American kid grows up hearing the story of John Henry, the fabled “steel-driving man” who died besting a steam-powered machine that threatened to make the American worker obsolete. Popular tradition claims that the contest took place in West Virginia’s Big Bend Tunnel.

But the state also claims to be home to aliens, bizarre creatures, and more. Atomic Wolf, the creator and owner of A-Bomb Radio, has been making a series of videos covering these folk tales and speculating how they can fit into Fallout 76. So far, there are four monsters we can expect to see while wandering the wastes of West Virginia.

Out of all the local legends, Mothman is the most hyped. Bethesda lead artist Nate Purkeypile even wore a Mothman shirt in a recent documentary about the studio. Redditors at the Fallout 76 subreddit dove into wild speculation over whether this was a cheeky Easter egg or simply a candid moment.

In any case, the Mothman is indeed a big local legend that has made its way into the mainstream. Mothman is prominently featured in several books and films, such as the Mothman Prophecies by John Keel and its movie adaptation. More recently, there were a whopping 55 reports of a “Mothman” from the Chicago metropolitan area in 2017.

West Virginians have had all sorts of theories for Mothman, ranging from it being a cryptid to a demon spawn. Atomic Wolf notes that in Fallout’s case, it’s more likely to be a pre-war experiment gone wrong or a creature mutated by the nukes.

The Beast of Grafton

The Beast of Grafton has been spotted in Fallout 76 gameplay and named in the magazines that can be found in-game.

Like the Mothman, the Beast of Grafton is also a legend from the 60s that has bullet sponge written all over it. The headless juggernaut will presumably be very annoying to kill judging by the fact that it is enormous and there is no apparent head for headshots, at least not one that is visible.

Apparently, a reporter from The Grafton Sentinel spotted the monster in 1964 during a late drive home. Cockrell’s claim was dismissed, so he turned to Gray Barker, the same paranormal author who popularized Mothman to the public.

Barker was actually a skeptic who peddled his books to conspiracists for the money, but in Fallout 76, the Beast of Grafton will be a very real threat.

Stories of the Snarly Yow date back to 1790 in Maryland, making it one of the older folk tales on the list. Some witnesses reported an enormous black dog that would appear out of nowhere to spook horses before vanishing once the rider was thrown off by their panicked horse. One particularly creepy sighting describes a headless white dog dragging a chain.

It’s also tough as hell because people have beat it with weapons and shot it with firearms to no apparent effect. If the Snarly Yow does indeed make an appearance in Fallout 76, then perhaps Bethesda will gamify this part of the legend and give it a phasing ability that causes bullets to go right through it.

Atomic Wolf reckons that the creature perching on the ruins of the state capitol could be the Snarly Yow.

The Flatwoods monster was supposedly a 12 feet tall alien with two bright red eyes and hooked arms that was spotted by a pair of brothers 1952. Eugene Lemon, a West Virginia National Guardsman, accompanied a small party that went to investigate what the boys saw.

Lemon claimed to have found the monster when he turned his flashlight onto a pair of red lights that turned out to be the creature’s eyes. The creature hissed and floated towards Lemon, which scared the piss out of him — as giant aliens are prone to do, at which point he screamed and ran.

The Fallout series, of course, is no stranger to aliens. You can find an alien ship in the first game and Fallout 3 has a mini-campaign on a Zetan mothership. It’s safe to assume that such a prominent UFO story specific to West Virginia would make it into Fallout 76.

What Other Things Can We Expect In Fallout 76?

Aside from creatures and places pulled from West Virginia folklore, Bethesda’s Todd Howard mentioned during the Fallout 76 reveal in E3 2018 that the state is also “where the actual nuclear secrets are kept.” This may have been a reference to Project Greek Island, a clandestine program that sought to preserve American leadership in the event of a nuclear war.

The US government maintained a bunker built beneath The Greenbrier resort in West Virginia that would’ve housed Congress if Fallout ever became a reality. It featured living quarters, a kitchen, a hospital, an auditorium big enough to be a Senate chamber (with 470 seats), and even a 100-foot radio tower to transmit broadcasts, which is perfect for a series like Fallout. You can be certain that this project will be making an appearance.

That’s our guess, anyway. The only way to know for certain is when the beta starts, which Bethesda hasn’t announced yet. Until then, the ground is still ripe for speculation.