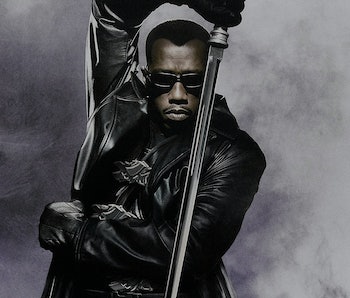 Blade’s 20th anniversary is almost here, and it’s hard to imagine how much the movie landscape has changed in the two decades since the film’s release. Blade was really a progenitor of the MCU and modern superhero craze — an unexpected success that was so unexpected that the studio at one point requested a very, very bad change in a misguided, implicitly racist attempt to bolster the film’s chances.

Entertainment Weekly published a comprehensive and lively Blade oral history on Monday, and while it’s chock full of interesting anecdotes (including an in-depth breakdown of the famous “blood rave” opening scene), the most startling revelation comes when screenwriter David Goyer mentions that the studio wanted Blade to be white.

“At one point the [studio] came to us and said ‘can Blade be white?’ and I said ‘absolutely fucking not. Like, that is just terrible. You cannot do that,’” Goyer recalls in the piece.

Presumably, Goyer’s referring to New Line Cinema, although he does note earlier in the oral history that the studio specifically wanted to make “a lower-budget black superhero film.” There’s no indication that the whitewashing idea got very far, but that it was even an idea in the first place is wild.

Blade was ultimately played by Wesley Snipes (the oral history reveals that had the filmmakers managed to get Denzel Washington to sign on, they would’ve had a bigger budget). The hero made his debut in the comics in 1973’s The Tomb of Dracula #10, and to whitewash the character so overtly would’ve been a travesty.

Blade wasn’t just ahead of its time in terms of being a comic book movie — it was also a wildly successful comic book movie with a black lead, a feat that arguably wouldn’t be truly matched until Black Panther released in 2018. Consider how crazy that is: There are only two major black-led superhero movies in the span of two decades (Catwoman and Hancock get honorable mentions, but neither had the impact of Blade or Black Panther).

It’s hard for these types of movies to get made, in no small part because there are studio types who think a white hero is more profitable. Luckily, whoever wanted to whitewash Blade was overruled, and Blade became a landmark movie in more ways than one.