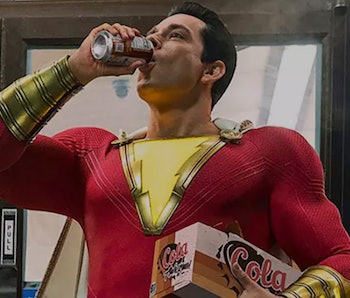 Superman gets a lot of flack for being a “lame” hero, as he’s a big boy scout compared to Batman. Your milage may vary on whether or not that criticism is fair, but Warner Bros. certainly overcorrected when they made him dark and scary in the DCEU. That’s why the first official image from Shazam! is such a delight, as it’s DC leaning into the corniness of its most wholesome character, one who is too much of a lame-o to even drink a beer when given the chance. Good!

On Wednesday, Entertainment Weekly revealed the first official picture of Zachary Levi as Shazam, the magical superhero formerly known as Captain Marvel. The picture shows Levi in costume alongside It star Jack Dylan as the two chug soda outside of a convenience store. That they’re pounding cans of cola instead of beers is telling, because Shazam is actually a 14-year-old orphan named Billy Batson who gains the power to transform into an adult superhero after encountering an ancient wizard (to be played by Guardians of the Galaxy actor Djimon Hounsou, it was revealed on Tuesday.)

So, presumably what’s happened is that Billy and his pal Freddy Feeman (Dylan) haven’t gotten to the “with great power comes great responsibility” part of his origin story and are using Shazam’s grown-up form to buy things they maybe couldn’t purchase as minors. But, rather than buy beer, they settle for soda, which is so charmingly innocent and childish that you can’t help but get a warm feeling.

This is the opposite of almost killing somebody before realizing that your moms have the same name, is what I’m saying.

While it’s possible that they settled for soda because Shazam does not have a valid ID, this little picture bodes well for Shazam!’s lighter, brighter tone.