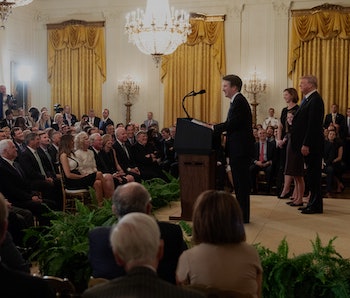 On Monday night, President Trump put the final nail in the coffin of Democratic dreams of a liberal Supreme Court by nominating Brett Kavanaugh as Justice Anthony Kennedy’s successor.

The DC circuit judge has deep conservative bona fides, working with Ken Starr to argue for President Bill Clinton’s impeachment and serving as senior associate counsel in the George W. George W. Bush White House, but where does he stand on contemporary issues like net neutrality, the environment, and privacy?

In 2017, Kavanaugh wrote that the FCC’s net neutrality rules were unlawful because “Congress has never enacted net neutrality legislation or clearly authorized the FCC to impose common carrier obligations on Internet service providers.” Kavanaugh went on to dispute them on a First Amendment basis, arguing that the FCC’s former rules were a form of government censorship on internet companies.

One of the most controversial areas of Kavanaugh’s judicial record is his writing on the environment. As a member of the Court of Appeals, Kavanaugh has repeatedly written against the Environmental Protection Agency’s (EPA) efforts to curb pollution, establishing a pattern of rejecting EPA regulation on the basis that it’s a form of overreach, despite his belief that “the Earth is warming, and humans are contributing.”

In 2012, Kavanaugh dissented against a decision that allowed the EPA to regulate via the Clean Air Act without consideration of cost, writing “As a court it is not our job to make policy choices.” The Supreme court would go on to side with Kavanaugh, ordering the EPA to consider costs in its Clean Air Act regulations

That same year, Kavanaugh also wrote a decision against the EPA’s effort to stop pollution that crossed state lines. He was later overruled by a 6-2 Supreme Court vote.

In 2014, Kavanaugh wrote a dissent to a decision that allowed the regulation of mercury in power plants without cost consideration. His reasoning was later used in a majority Supreme Court ruling.

In 2017, Kavanaugh wrote for the majority in overturning an EPA rule requiring companies to replace heat-trapping hydrofluorocarbons with other chemicals, writing once again that “EPA may act only as authorized by Congress.”

In a 2010 case, Kavanaugh argued that attaching a tracking device to a suspects car isn’t a violation of the Fourth Amendment because a person’s movements in public aren’t assumed to be private.

In 2015, Kavanaugh wrote that the National Security Agency’s massive phone-surveillance program, revealed by Edward Snowden, is “consistent with the Fourth Amendment,” citing the Third Party Doctrine, which conservative scholars say allows data to be collected as long as it’s surrendered to a third party (this year, the Supreme Court indicated limits on the doctrine’s use when they ruled that a warrant was required to collect some cell phone location data). As the Court continues to debate the limits of the Third Party Doctrine and data collection Kavanaugh’s opinions on this will prove crucial.

Perhaps on a brighter note for drone enthusiasts, Kavanaugh is anti-drone-regulation.

In 2017, Kavanaugh ruled for the majority, writing that “The [drone] Registration Rule is unlawful as applied to model aircraft.”