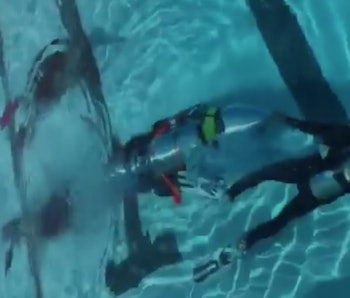 Boring Company CEO Elon Musk is now part of an international team of engineers, divers, and other experts working to rescue a group of boys from a Tham Luang Nang Non cave in Thailand. Not only did Musk send his own team of engineers to Thailand to work with the rescue mission, but it seems his newly designed submarine — made specifically with the trapped children in mind — could be ready to aid divers in their next phase of evacuations.

Soon after the location of the 12 missing boys and their soccer coach was discovered on July 2, Musk shared multiple ideas for the rescue mission on Twitter and later announced that his engineers were en route to assist with the rescue mission. After discussions with the team in Thailand, Musk tweeted that SpaceX engineers were eight hours away from completing a submarine that was capable of rescuing the stranded boys.

On Sunday, Chiang Rai Governor Narongsak Osotthanakorn held a press conference to announce that four of the 12 boys had been successfully evacuated. Osotthanakorn did not specify whether SpaceX and Boring Company engineers played a role or if Musk’s submarine would be deployed for the next phase of evacuations. However, soon after the press conference, Musk shared a video of the submarine being tested in a pool.

Musk has described the submarine as a “double-layer Kevlar pressure pods with Teflon coating to slip by rocks.” While the front nose cone protects the passenger against the impact of rocks or collisions, the air tanks and vent valves are designed to create an airflow rate that would allow passengers to breathe without SCUBA training. This would be helpful if the child is a weak swimmer or in the event of a panic attack, wherein a passenger struggles to self-regulate breathing patterns. In an earlier tweet, the Boring Company CEO said this prototype was being tested in a pool specifically with subjects untrained in SCUBA.

At the press conference, Osotthanakorn warned that Thailand’s rescue team would need to make sure all conditions were stable before launching the next phase of evacuations. It’s uncertain whether this submarine will be deployed in the next mission, but the next strategy meeting for rescue workers is scheduled for Sunday night.

More like this
Science
6.27.2022 8:45 PM
NASA found the crash site of the rocket booster that hit the Moon in March
By Kiona Smith
Innovation
7.2.2022 6:00 PM
Are self-driving cars safe? The tipping point rests on a psychological illusion
By Jean-François Bonnefon and The Reader
Innovation
7.1.2022 10:00 AM
Robots are ready to get touchy-feely
By Sarah Wells
Related Tags
Share: