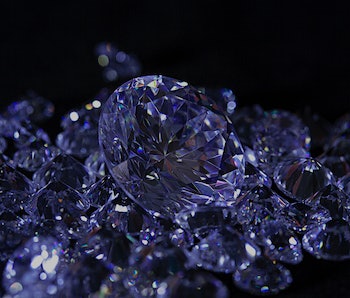 Storing quantum bits of information, or qubits, is a lot harder than storing ordinary binary digits. It’s not simply ones or zeroes, but the whole range of subtle quantum superpositions between them. Electrons can easily slide out of those states if they’re not stored in the right materials, which is why electrical engineers at Princeton are working with a UK manufacturer to create a better storage material — synthetic diamonds — from scratch. They published an account of their success on Thursday in Science.

For decades, physicists, materials engineers, and others have been trying to achieve the conceptual promise of quantum-encrypted communications because the data transferred in that process is theoretically immune to covert surveillance. Any attempt to observe that data between parties — à la the Heisenberg Uncertainty Principle — would fundamentally alter that information, quickly revealing that it was compromised. The problem has been storing and preserving qubits and then converting them to fiber optic-ready photons, and using diamonds appears to be the route toward achieving both. But not just any diamond will do, which is why Princeton’s team has been hard at work creating a synthetic one, as they describe in their paper.

“The properties that we’re targeting are what’s relevant for quantum networks,” electrical engineer Nathalie de Leon tells Inverse. At Princeton, where de Leon is an assistant professor, her team’s focus is essentially inventing quantum hardware. “It’s applications where you want something that has a long storage time, and then also has a good interface with photons so that you can send light over very long distances.”

Photonic interactions matter a lot for high-speed international communications because all of the information traveling along fiber optic cables moves through our global infrastructure as discrete photons — cruising at 69 percent of the speed of light. (Nice.)

“That puts a lot of constraints on the optical characteristics,” de Leon says. “As one example, it’s really important that the color be stable. If the color of the photon is jumping around over time, then that’s really bad for these protocols.”

Right now, de Leon’s group is trying to craft a version of these synthetic diamonds that can convert to the standard 1,550-nanometer wavelength on which photons now traverse fiber optic cables. Currently, her team’s synthetic diamonds support 946-nanometer photon wavelengths. (Photon “color” is a bit of a euphemism here since both of these wavelengths are shades of infrared outside the visible spectrum.)

The hurdle that her team just succeeded in crossing is storing those qubits in crystalline quantum repeaters, similar to the repeaters that are currently used to prevent signal loss and degradation in today’s fiber-optic communications. The critical step in this process was producing synthetic diamonds with as little unwanted impurities as possible (nitrogen, mainly) and more of the impurities they actually did want (silicon and boron).

“Nitrogen turns out to be the predominant defect that you get in these diamonds,” de Leon says. Her group’s partners at the British diamond maker Element Six had to create above-average vacuum conditions since even ordinary vacuums can leave enough nitrogen in the chamber to contaminate the artificially-made crystals. Because nitrogen has one more free electron than carbon, nitrogen impurities disturb the unique electrical makeup that the researchers are hoping for.

Other small defects can undermine the qubit-storing potential of these diamonds, too. The goal is to have pairs of atom-sized vacancies in the crystal framework alongside a substituted silicon atom where a single carbon used to be, but sometimes those pairs can bunch up together in “vacancy clusters” that start to redistribute their electrons in annoying, counterproductive ways. Sometimes polishing and etching damage on the surface of the diamond can also cause a domino effect, messing with this pattern of electrons, too. This is where adding boron — which has one less free electron than carbon — can help.

“What we had to do,” de Leon says, “is both start with this ultra-high purity diamond and then grow in some boron to basically soak up any of the extra electrons that we couldn’t control. Then there was a lot of materials processing — boring stuff like thermal annealing and repairing the surface at the end to make sure that we still get rid of a lot of these other types of defects that give you extra charges.”

Mastering both of these challenges, many in the field suspect, are the keys to fully functional and nearly impossible to crack quantum encryption.

Before the dawn of synthetic diamonds only a few years ago, researchers in the field of quantum optics had to rely on natural diamonds to do their work — one specific diamond, in particular.

According to de Leon, everyone in the field of quantum optics had to rely on a single, naturally-made diamond from Russia that just happened to have the right percentage of boron, nitrogen, and other impurities to make their research possible. Fragments of the diamond were cleaved off and distributed to research groups across the world.

“Many of the groups had their own little piece of the ‘magic’ Russian diamond,” as de Leon told Princeton’s in-house news service in 2016. “At Harvard, we called ours ‘Magic Alice’ and ‘Magic Bob.’”

More like this
Science
5.14.2022 10:00 AM
This viscous liquid metal could lead to a revolutionary robotics breakthrough
By Kurt Kleiner and Knowable Magazine
Science
5.14.2022 7:00 PM
Why scientists think physics could be in for a reckoning
By Roger Jones and The Conversation
Science
5.8.2022 10:00 PM
Real-life time travel hinges on this one controversial scientific theory
By Barak Shoshany and The Conversation
Related Tags
Share: