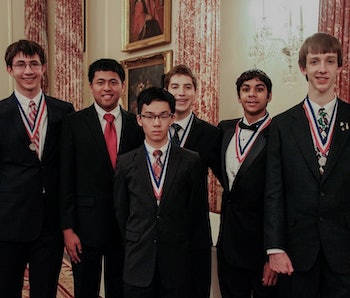 American’s math scores are hot, rotting garbage, so this is the kind of victory that makes the [Miracle on Ice]((https://en.wikipedia.org/wiki/Miracle_on_Ice) look like beating your dog at Tetris. For the first time in more than 20 years, America has taken the title at the International Mathematical Olympiad in Chiang Mai, Thailand. The States just mathed shit out of all the rest of the world’s maths, and left them in our aftermath.

The Guardian describes the Battle Royal of math as a two-day contest in which competitors have four-and-a-half hours to solve three problems per day. The problems are incredibly complex, with no calculators allowed. Getting through just one means you’re a master of math.

Team U-S-A! U-S-A! triumphed out of 104 teams who traveled from around the world (some even took elephant rides) to get there. The traditional celebration for world champions might be a few years beyond these fellows. Here’s wishing them a debauched pizza party with all the Mountain Dew Code Red they can drink through an abacus.

More like this
Mind and Body
7.1.2022 8:00 PM
How to spot a liar using a classic mathematical trick
By Dorje C Brody and The Conversation
Science
6.27.2022 12:00 AM
NASA lit 1,500 fires on the International Space Station — and discovered something new
By LAURENCE TOGNETTI and Universe Today
Science
6.30.2022 10:45 AM
These 5 objects could be Webb's full-color first images
By Kiona Smith
Share: