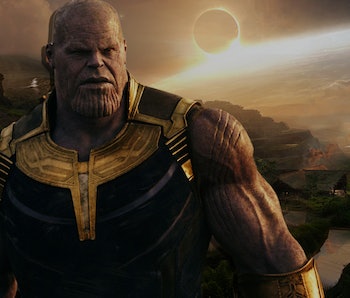 At the end of Avengers: Infinity War, everybody was either dead or devastated at watching half of their friends turn into dust. Thanos was the one exception, as he seemed pleased as punch that his plan had succeed, and the movie ended with him enjoying retirement at a lush farm. But, where exactly was that farm? Concept art for the movie reveals its surprising location, and the implications could be huge for Avengers 4.

Concept artist Pete Thompson shared several high-resolution pieces of Infinity War concept art on his portfolio website, along with a brief title describing what each image was depicting. All the images are cool, but the serene view of Thanos’ pastoral farm landscape is titled “Thanos Titan Farm.” That would seem to indicate that the Mad Titan has indeed returned to his home, but, wait — wasn’t Titan an uninhabited wasteland? And weren’t Iron Man and Nebula still on a dusty, dead Titan when the movie ended? How can Thanos be on a vibrant, green Thanos?

As Thanos explained in Infinity War, Thanos was once a beautiful, flourishing world. However, the population grew to be too great for the planet to support, and after rejecting Thanos’ genocide-based solution, a terrible catastrophe occurred and killed the whole world.

If Thanos is indeed back on Titan, he likely would’ve had to use the Infinity Stones to repair the planet. Perhaps he used the time stone to transport himself back to a time when Titan was inhabitable — not a crazy theory, given that it’s all but confirmed that time travel will be a major part of the Avengers 4 plot.

Or maybe he used the Reality Stone’s powers of alteration to make the planet live again. Thanos did exactly that earlier in the movie, when he briefly revitalized a vision of the planet as it was once while explaining his plan to the heroes.

Either of those options seem like they would require expending a considerable amount of the Infinity Stones’ power, and given that the Gauntlet was badly damaged by Thanos’ snap, it’s unclear how the Stones fared. Clearly, they’re still usable in some way (Thanos was able to use the Space Stone to teleport out of Wakanda in Infinity War) but the existence of a vibrant Titan indicates that they’ve still got plenty of strength left in Avengers 4.