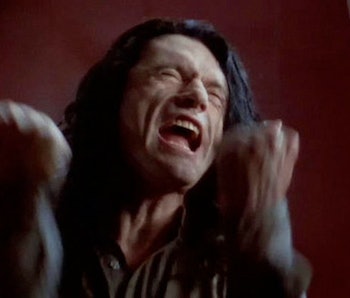 It’s the fifteenth anniversary of The Room, a movie that stands out in the canon of Bad Films for being a Very Bad Film, which is precisely why so many people love it. But if Tommy Wiseau’s vision was truly realized, it would have been even worse.

Even if you haven’t watched The Room, you’ve definitely heard it referred to as the worst films ever made. That infamy and the cryptic past of its eccentric creator Tommy Wiseau has made it an accidental classic. It’s tempting to think it’s one of those movies that’s “so bad it’s good” because of the huge cult following, but this is not the case.

The film is spectacularly bad on every level, and ironically, that is its only redeeming quality: it is one of the most unintentionally hilarious films ever produced.

However, it could’ve been far worse. In the very appropriately titled memoir The Disaster Artist: My Life Inside The Room, the Greatest Bad Movie Ever Made, Tommy Wiseau’s co-star and best friend Greg Sestero said he had to talk Wiseau out of a subplot that would’ve revealed the title character Johnny as a vampire. Sestero mused that this is because Wiseau fantasized about becoming a vampire himself.

The original script had no sex scenes. Instead, Johnny nuts into Lisa’s dress.

The Room has been referred to as the Citizen Kane of bad films, but I disagree. It’s a film that never realized its full potential.

It could have been so much worse, which maddeningly, would’ve made it so much better.