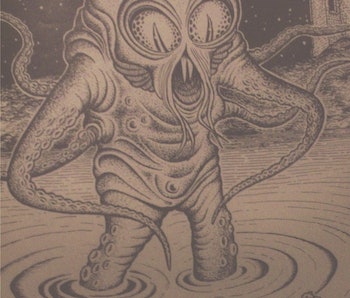 Now that NASA’s New Horizons satellite has looked at the face of Pluto, it’s time to map everyone’s favorite dwarf planet, which means naming a dwarf planet’s worth of geologic features. In order to prolong the enthusiasm for our solar system’s on-again, off-again planet, NASA is doing what any good organizer does and making some Google Spreadsheets, specifically some spreadsheets full of naming ideas. And there are some seriously great choices, including tributes to the beloved character created by H.P. Lovecraft, J.R.R. Tolkien and Gene Roddenberry.

Traditionally, NASA themes the names of features on new planets. And in the case of Pluto there are several themes in contention. The space mission theme includes names like Sputnik, Soyuz, and Astrid (Sweden’s first micro-satellite) and is a generally inoffensive choice. But the option getting the most traction — other than explorers and astronomers — is underworld being. The names on that list include Cthulhu, Balrog, Prosperina, Morgoth, and Anubis. The name Cthulhu, which Lovecraft devised for his “Great Old One,” enjoys broad international support because the world is full of magnificent weirdos.

On a somewhat similar note, the underworld locales category is also quite popular. People really like the idea of Tartarus and Elysium being in the heavens. They are less enthusiastic about Quidlivun, but there just aren’t that many Inuit people. Ditto Pulotu, with apologies to the native peoples of Tonga.

Where things get even stranger is down the sheet in the section for naming parts of Charon, Pluto’s large moon. The slate of characters from Star Trek, which includes Kirk, Spock, Sulu, and Uhura, is ever so slightly more popular than the Star Wars slate, which includes Skywalker, Leia, Solo, and Vader. Gilgamesh, who was an epic hero even before the original Star Trek series debuted in 1966, received considerably less popular support, though Pirx, the spaceship pilot from Stanislaw Lem’s “Tales of Pirx the Pilot,” was massively popular with Russians.

Another potential Charon category, exploration authors, included Douglas Adams, Arthur C. Clarke, and Stanley Kubric. These options proved less popular — with the exception of Adams, who is a bid damn deal among the sort of people who vote on space names.

NASA will make its announcements during and after the process — and potentially remix some of the categories — but it’s good to know that there are so many great options and that it is only somewhat likely there will soon be a celestial mountain range carrying the name of Heironymous Bosch, whose paintings make Lovecraft’s books look like “Goodnight Moon.”

More like this
Science
Sep. 12, 2022
“Space is hard”: How tragedy and ambition have shaped NASA’s Artemis I mission
By Doris Elín Urrutia
Science
17 hours ago
Mars’ ancient lakes could help discover life on the Red Planet
By Matt Williams and Universe Today
Science
Sep. 24, 2022
Super-Earths may be the best places to look for alien life
By Chris Impey and The Conversation
Related Tags
Share: