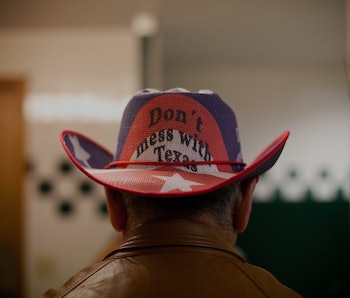 Texas has a lunatic fringe problem, sort of like potato salad has a mayo problem: Things wouldn’t be the same without it, but a little goes a long way. This week the Jade Helm 15 Military Exercise, inspired in the supposedly rugged populace fears of prison trains, and the idea of Walmarts transformed into internment camps had the local nut jobs burying caches of weapons.

Yes, some Texans actually believed the U.S. government, under the guise of a routine training exercise, was running a cloak-and-dagger military operation that would lead to a takeover of the state itself. Which, I mean, makes zero sense on so many levels there is no real need to unpack them all. Texas isn’t doing itself any favors regarding national opinion. Then it came and went, without incident, leaving Texans to dig up their artillery, and leaving the rest of the country to point and laugh.

I am a native Texan, born and raised the first 24 years of my life, and I love the state with the same irrational geographical pride the majority of its 27 million residents seem to have, a state pride that baffles most outside its borders. The madness plaguing Jade Helm conspiracy theorists is not the status quo in Texas, despite appearances. However, the mere fact that a wide swath of kooks convince themselves the state is so precious and sovereign that the nation to which the state belongs would somehow “invade” it is precisely what’s wrong with Texas.

Every state has its own pockets of loons. Texas is just so damned big that ours hit quorum pretty quickly. I can almost guarantee you anyone educated in one of the dozens of Texas universities, anyone in Dallas or Houston or any other large metropolitan area, has a headache today from rolling his/her eyes while the Jade Helm “threat” came and went, adding another pin into the board of Texas’s theoretical insane asylum.

Not only are the progressive Texans ashamed of Jade Helm. Today, I phoned City Hall in Christoval, Texas, which was the focus of a New York Times piece on this impending doom; as soon as I said “Jade Helm,” I got a click and dead air. A call to Bastrop, Texas was met with a dodgy bit of nervous murmuring by the clerk on the other end. “The city is just moving on from the whole thing,” she told me.

Look, America. On behalf of Texas I am sorry for Jade Helm being a thing. Sorry for the Branch Davidians. Sorry for Rick Perry. We have plenty of unhinged, flag-waving, gun-squirreling paranoiacs roaming the expansive countryside. But not everyone here is batshit-bonkers, not by a long shot. What do we look like, anyway — Florida?